Self-Portrait with Nothing (Hardcover) 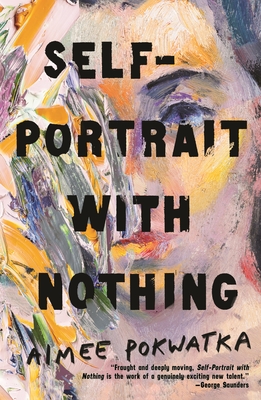 Self-Portrait with Nothing (Hardcover)

An adoptee finds that she is set to inherit from her birth mother, a famous artist who has gone missing and may or may not be dead. A story of identity becomes a mystery before twisting into a scifi thriller. An escapist page-turner of a debut.

— From Self-Portrait with Nothing by Aimee Pokwatka

Orphan Black meets Fringe in a story that reminds us that living our best life sometimes means embracing the imperfect one we already have.

“Aimee Pokwatka’s Self-Portrait with Nothing is tantalizing and elusive lacework, delicately balanced between the branches of fantasy, mystery and realism like a spider’s web.” —The New York Times

If a picture paints a thousand worlds . . .

Abandoned as an infant on the local veterinarian’s front porch, Pepper Rafferty was raised by two loving mothers, and now, at thirty-six is married to the stable, supportive Ike. She’s never told anyone that at fifteen she discovered the identity of her biological mother.

That’s because her birth mother is Ula Frost, a reclusive painter famous for the outrageous claims that her portraits summon their subjects’ doppelgängers from parallel universes.

Researching the rumors, Pepper couldn’t help but wonder: Is there a parallel universe in which she is more confident, more accomplished, better able to accept love?

A universe in which Ula decided she was worth keeping?

A universe in which Ula’s rejection didn’t still hurt too much to share?

Combining a thrilling pan-continental race against time with an authentic and touching personal drama, Self-Portrait with Nothing is an unforgettable debut that explores what it means to be part of a family.

Aimee Pokwatka grew up in Wheeling, West Virginia. She studied anthropology at the University of North Carolina at Greensboro, and received her MFA in creative writing from Syracuse University. Her work has been published in Fairy Tale Review, Outlook Springs, Hunger Mountain, and elsewhere. Self-Portrait with Nothing is her first book. She lives in New York with her family.

“A thrillingly inventive, highly original debut that manages to be both a compelling mystery story and a dazzling meditation on existence. Pokwatka’s particular gift is her ability to see a strange concept through to its conclusion.” —Booker Prize winner, George Saunders

“Aimee Pokwatka’s Self-Portrait with Nothing is tantalizing and elusive lacework, delicately balanced between the branches of fantasy, mystery and realism like a spider’s web.” —The New York Times

“Self-Portrait with Nothing is a thoughtful, beautiful contemplation on identity and how we build ourselves from all the bones we're given, both by the people who love us and by the people who leave us. How is this a first novel? Gorgeously drawn characters in a new and compelling setting, this is a beautiful book that deserves to be read.” —New York Times Bestseller, Seanan McGuire

“Pokwatka’s debut is a unique and well-plotted story with many twists and turns. Recommended for science fiction fans, but it will also appeal to a wider audience.” —Library Journal, starred review

“A deeply felt, introspective meditation on motherhood and the nature of the self.” —Publishers Weekly

“Self-Portrait with Nothing heralds a serious talent. It's a story that brims with life, ambition, and joy.” —Sarah Langan, author of Good Neighbors

“A beautiful debut about the people we aren’t and the paths we don’t pursue… Pokwatka’s voices are tantalizing and elusive. “ —The New York Times

“[Self-Portrait with Nothing] had me feeling less alone in my own multiverse. And then that ending, despite bittersweet aspects, had me feeling so full of joy to be alive and working to figure out my own happiness.” —Matthew Galloway at Anythink Libraries