The A Swing: The Alternative Approach to Great Golf (Paperback) 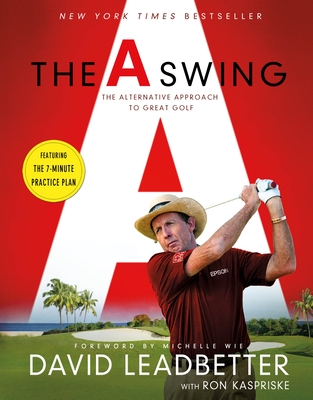 The A Swing: The Alternative Approach to Great Golf (Paperback)

The national bestselling golf instructional, The A Swing, created by the world's #1 instructor to help golfers consistently hit good shots.

David Leadbetter is the most recognized golf instructor in the history of the game. His book, The A Swing, is an evolution of his swing theories that have successfully helped thousands of golfers globally. His tour players, whom he has coached over the years, have amassed 19 major golf championships. David has been prolific during his 30+ year career in producing books, videos, teaching aids that have inspired golfers of every level to reach their potential.

The A Swing - A stands for Alternative - is a simple way to swing the club, which follows biomechanically sound, scientific principles, and only requires minimal practice. The A Swing has been thoroughly tested with a wide range of players, from tour level to beginner, junior to senior, and the results overall have been nothing short of dramatic.

The A Swing is a way to develop a consistent, repetitive motion which will improve accuracy and distance, and is easy on the body. It will fix many of golf's common faults, and the book takes you through an easy, step-by-step approach. With over 200 illustrations, easy drills, and the 7-Minute Practice Plan, golfers now have the opportunity to play the way they've always dreamed of. Golf is a frustrating game, even for the top players, but the A Swing will make it easier and more fun. It could really change the way the game has been taught, which hasn't changed for years - it is not an exact method, and has leeway for individualism.

David is excited that the A Swing will help golfers the world over enjoy the game more. In essence, the A Swing is a shortcut to great golf. Whatever your level of play is now, whatever your goals, however you've been struggling with the game, the A Swing could change your golfing life.

DAVID LEADBETTER is regarded as the world’s premier golf instructor. His players have won a combined 18 major championships and six of those golfers were ranked No. 1 in the world. He operates dozens of golf academies around the globe and has authored several bestselling instruction books and videos. His books include Leadbetter's Quick Tips and David Leadbetter 100% Golf. David writes monthly articles for the game's leading publication—Golf Digest. He lives in Orlando, Florida.

Ron Kaspriske is a longtime editor at Golf Digest and has written several books on the game, including Golf: Play the Golf Digest Way, Golf Digest's Complete Book of Golf Betting Games, and What's a Golfer to Do?.

“It has been fun working with David. I have learnt so many new things about swing fundamentals and how the body and muscles work. I'm excited about what lies ahead, and so will you be, if you try David's A Swing – it could really help your game.” —Lydia Ko, World's #1 Female Golfer, 5-time winner on the LPGA tour, and Rookie of the Year 2014

“The A Swing represents a genuine breakthrough in the realm of golf instruction. Uncomplicated in its philosophy, and with scientific proof of it's effectiveness, the A Swing has the potential to make a significant difference to the way in which the game is taught and played – and, indeed, the speed at which regular golfers can begin to enjoy hitting consistently solid shots. With characteristically astute observation, the world's most innovative teaching professional has delivered a major contribution to the game of golf.” —Richard Simmons - Editor, Golf International Magazine (UK)

“This A Swing is simple and efficient, easy to repeat, and has allowed me to play well despite my back issues. I don't have to practice as much and my misses have been so much better. You need to try it!” —Ryan Blaum, Leading Money Winner, 2013 PGA Latin American Tour

“After many years of practicing and searching for the key to the swing, I believe this is it. The A Swing is awesome, simple, and easy to apply. Wish I knew about this 25 years ago!” —Denis Watson, Three-time PGA Tournament Winner and Winner of the 2007 PGA Senior Championship

“Trying the A Swing was an amazing transformation. My game was so inconsistent but in just a few shots of working with this different backswing I started hitting the ball out of the middle of the clubface and really striping it. My golf buddies were blown away by how much accuracy and distance I gained!” —Jackie Flynn (8 handicap) – Actor and Comedian

“The A Swing I have worked on with David is so easy to do and repeat, and when it goes off I have a clear picture of what to do to get back on track.” —Alex Levy (France), Two-time European Tour Winner

“My technique since working with David has improved amazingly. The A Swing is very natural, I don't have to overthink it, and the world's greatest golfer incorporated parts of it. I feel I can now reach my true potential as a player.” —Rafael Cabrera-Bello (Spain), Two-time European Tour Winner

“I struggled towards the end of my junior golf career, but since working on the A Swing with David things have really turned around. I feel my swing is so manageable now that I only have to see David for a few minutes periodically to keep it on track. I am looking forward to a successful LPGA career.” —Simin Feng (China), Newly Turned Professional Golfer, Winner SEC College Championship 2014

“I have been a passionate, competitive senior golfer for many years, winning tournaments all over the world. When David introduced me to the A Swing with a few tournaments to go to reach the 200 mark, it made all the difference. It is so understandable and answered all my questions. My consistency has improved immensely and it makes practicing more productive. The A Swing has given me a new lease on life and I know I can still improve and hopefully win many more tournaments.” —Arlene Mckitrick, Senior Lady Golfer, Winner of Over 200 Tournaments

“There is a wonderful simplicity and logic to the A Swing which produced instant results in my game, making range time meaningful and, gave my confidence a huge boost on the course in competition. One of the keys to playing better golf is 'trusting your swing', entertaining no self doubt and with a firm conviction that it will work as required especially under pressure. The A Swing does what it says on the tin! The scientifically proven biomechanical advantage of this swing speaks for itself, and I can say without doubt it has made the single greatest positive impact on my game in 40 years.” —Robin Sieger, Peak Performance Coach, and Author of the best selling Silent Mind Golf

“I am a new golfer who didn't play a lot of ball sports growing up and I started with the A Swing. After only a few months of playing, I am part of the game, and the people I play with cannot believe how I hit the ball. The A Swing is easy to understand and the 7 minute practice plan gave me the feel for it, and being a mechanical engineer, it all makes absolute sense. All amateurs should try it.” —Pete Simonson, Novice Golfer

“I am a junior golfer who was not making much headway in the game. The A Swing gave me a plan and within a few months I went from being an 80 shooter to shooting in the 60s. I just stick to the plan and don't deviate. I know I am going to have a successful college career and hopefully someday compete on the PGA Tour.” —Kymer Li, Junior Golfer

“As a 60+ year old golfer with a low handicap my performance had plateaued. I had taken many lessons over the years but nothing has been as logical and clear as the A Swing. The A Swing has renewed my interest in the game as it has enabled me to perform well in competition. I am hitting it longer and my shot dispersion has improved significantly. There is less stress on my body and golf is more fun. An anti-aging system if ever there was one!” —Dr. Joe Branconi, Senior Golfer