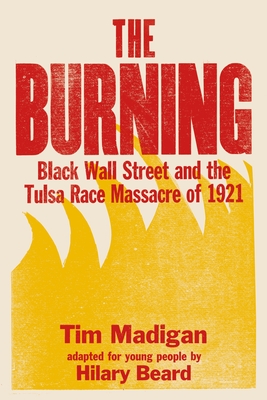 One of the worst acts of racist violence in American history took place in 1921, when a White mob numbering in the thousands decimated the thriving Black community of Greenwood in Tulsa, Oklahoma.

The Burning recreates Greenwood at the height of its prosperity, explores the currents of hatred, racism, and mistrust between its Black residents and Tulsa's White population, narrates events leading up to and including Greenwood's devastation, and documents the subsequent silence that surrounded this tragedy. Delving into history that's long been pushed aside, this is the true story of Black Wall Street and the Tulsa Race Massacre, with updates that connect the historical significance of the massacre to the ongoing struggle for racial justice in America.

TIM MADIGAN is an award-winning journalist and author of several books, including I'm Proud of You: My Friendship with Fred Rogers. He and his wife, Catherine live in Fort Worth, Texas.

Hilary Beard is an award-winning writer and an expert in book collaborations. She has partnered with many celebrities, experts, and public figures, including Katherine Johnson on her book Reaching for the Moon: The Autobiography of NASA Mathematician Katherine Johnson.