Marked for Life: One Man's Fight for Justice from the Inside (Hardcover) 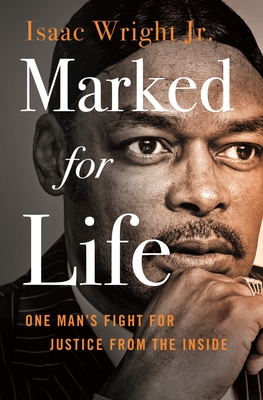 Marked for Life: One Man's Fight for Justice from the Inside (Hardcover)

An empowering memoir of courage and hope in the face of injustice—and the basis for the ABC television show, For Life—Marked for Life is the true story of Isaac Wright Jr.’s battle to win his freedom after being wrongfully imprisoned for crimes he didn’t commit, and a critical indictment of America’s judicial system.

“If I waited around for someone to save me, I’d be waiting my whole life. Unless I took the reins of this thing myself, I was going to die in prison. If that was my destiny, then I was going to die fighting. The desperation of that equation kept me up most nights. I would never find a gladiator. So I had to become him.”

In the summer of 1989, Isaac Wright Jr. was a 28-year-old independent music producer, who’d struck out on his own and became one of hip hop’s early success stories. With his dance crew Uptown Express, Wright won recognition on Star Search, toured with Run-DMC, and transitioned into management, co-founding his wife Sunshine’s music group, The Cover Girls. They’d settled in the New Jersey suburbs to raise their six-year-old daughter, never imagining that Wright would fall victim to gross police misconduct and a corrupt district attorney.

Accused of being a drug “kingpin” and incarcerated in Somerset County while the prosecutor and police built their case of lies against him, Wright realized he would get no help from any defense attorneys—white men uninterested in uncovering the truth or in proving the innocence of a black man. Pressured to take a plea deal offer of 20 years behind bars, Wright chose to take the law into his own hands by educating himself in the legal system so he could represent himself in court.

Studying statutes and cases in the jail’s law library, Wright became an adept legal mind. But despite acquiring knowledge that he put to use in defending his fellow inmates, he lost his trial and was sentenced to Trenton State Prison for life, plus 70 years in 1991. For the next five years, Wright would continue learning law, become a paralegal with the prison’s Inmate Legal Association, and appeal his case. Threatened by corrupt correction officers and convicts, his family falling apart, Wright fought for his life with every legal means at his disposal, eventually uncovering the smoking gun that unraveled the conspiracy perpetrated by law enforcement officials against him.

Marked for Life is not just the story of how Isaac Wright Jr. won his freedom. It is the story of how he found his true calling as a gladiator fighting on behalf of the oppressed and marginalized communities victimized by an unjust system of law.

Isaac Wright Jr. now practices law in the same courtroom where he was sentenced to life behind bars. Isaac’s remarkable story was the basis for the ABC drama series “For Life." As a lawyer at the Law Firm of Hunt, Hamlin & Ridley, his focus is on defending the wrongly accused and going after corrupt institutions.

Jon Sternfeld is the co-author of more than ten published books of nonfiction, including A Stone of Hope: A Memoir with Jim St. Germain (Harper, 2017) recommended by President Barack Obama, and Scenes From My Life with Michael K. Williams (Crown, 2022).

Praise for Marked for Life:

"Shot through with hard-earned wisdom and resilience, this is a powerful portrait of overcoming immeasurable odds." -Publishers Weekly

"Isaac’s story is so amazing and inspiring that if it was fiction it would seem far-fetched. There is nothing like it - and nobody quite like him on the planet. Read it, share it, and be inspired." –Shaun King, CEO Grassroots Law Project

"This book is a must read—a blue print for how to turn negative into a positive. Its motivational and educational qualities in overcoming life’s challenges to become an even better person should be a must read in our schools and colleges." –Joseph Antonio “Fat Joe” Cartagena, hip-hop artist

"Quite simply Isaac Wright Jr.’s story is the story of one of the bravest most determined individuals I have ever met. This book captures that 'shock and awe' and the world needs to read it and learn from it." –Mike Colter, actor, Luke Cage

"Isaac Wright Jr., is a man of honor and integrity but this book reveals a man whose character, drive and intellect is far beyond that of even the above average man. The book is mine blowing and inspiring. A must read." –Sean Ringgold, actor, Notorious and One Life to Live

"I’ve never read a story about a man thrown in a hell called prison for the rest of his life but set the fight for his own freedom aside to win the freedom of his fellow inmates. This book is a bible in selflessness and the hand god plays in the lives of people who have gained his favor. You haven’t lived until you’ve read this book." –Reminisce “Remy Ma” Mackie, hip-hop artist

Praise for Isaac and his ABC show "For Life":

“Isaac, his story is one of one. He’s not even a unicorn. He’s not one in a million. Everyone else would have copped out…But he’s tougher than the toughest guys I’ve hung out with. There’s a lot of tough guys out there, and what they’re afraid of is the government.” –Curtis “50 Cent” Jackson

“[Isaac’s] fortitude, determination, savvy and smarts to survive all those years in prison, his will and grit, is a great story. It’s a personal tale where we can also show the flaws in the justice system and try to bring about change.” –Hank Steinberg, Creator and Executive Producer of “For Life,” as quoted in the Los Angeles Times

"…the debut of “For Life” serves as a small marker in an evolving national conversation.” –Mike Hale for The New York Times

“[An] extraordinary redemption tale too unimaginable for any respectable Hollywood executive to take seriously if it were a work of fiction.” –Vibe