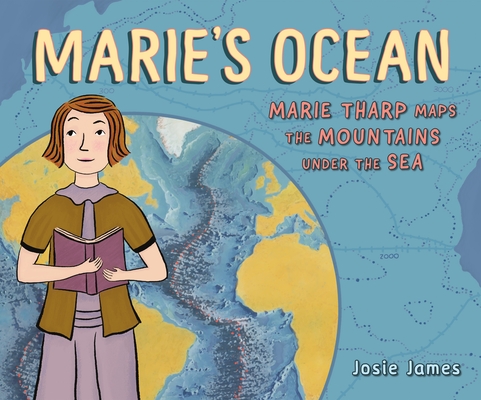 A mixed-format picture book biography of Marie Tharp, the remarkable woman who mapped the ocean floor.

Marie Tharp earned a graduate degree in geology in the 1940s, at a time when scientific careers were largely unavailable to women. Marie’s vision and tenacity paved the way for her to become one of the greatest oceanographic cartographers of the 20th century. She was the first person to map the ocean floor and discover the 40,000 mile long Mid-Ocean Ridge and Rift Valley. Her astounding discovery supported the theory of continental drift, which led to the theory of plate tectonics. But it was not an easy road, and Marie struggled to receive the credit she deserved for her discovery.

From Marie Tharp’s early childhood dreams all the way to her defining achievement, Josie James's Marie's Ocean is the story of one of earth science’s greatest hidden figures.

"The pacing and format will entice both engaged and reluctant readers; and the exhilaration of a new discovery is captured with a sense of wonder that is sure to inspire children and draw attention to the world of science . . . A winning combination of lyric description, accessible explanation, scientific history, feminism, and accomplishment." —Kirkus Reviews

"Tharp’s work with physiographic diagrams is explained in a detailed and easily understandable way, and the illustrations . . . incorporate maps of the ocean floor. This empowering, accessible account of Tharp’s career serves as a reminder that “sometimes it’s hard to convince people to believe something new”—and shows readers precisely how the groundbreaking Tharp did just that." —Horn Book

"The first-person narration clearly explains the connections between aspects of Tharp’s childhood, controversial scientific theories, and the sexism that kept her from conducting field research. James provides a deep dive into the STEM concepts and the detailed process that Tharp employed to show the world what lies at the bottom of our oceans. Highly recommended for public and school libraries." —School Library Journal

"Using speech balloons as well as standard text, the graphic-novel-style presentation is appealing, and James makes good use of maps, charts, and other images related to Tharp’s work. These are helpful in understanding her findings and their significance. An engaging introduction to Tharp and her significant contributions to geology and cartography." —Booklist