Death at SeaWorld: Shamu and the Dark Side of Killer Whales in Captivity (Paperback) 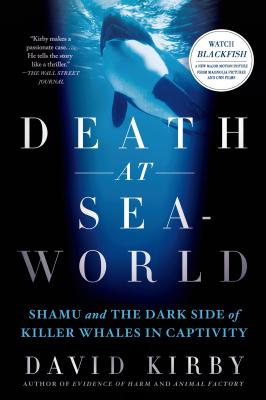 Death at SeaWorld: Shamu and the Dark Side of Killer Whales in Captivity (Paperback)

From the New York Times bestselling author of Evidence of Harm and Animal Factory—a groundbreaking scientific thriller that exposes the dark side of SeaWorld, America's most beloved marine mammal park

Death at SeaWorld centers on the battle with the multimillion-dollar marine park industry over the controversial and even lethal ramifications of keeping killer whales in captivity. Following the story of marine biologist and animal advocate at the Humane Society of the US, Naomi Rose, Kirby tells the gripping story of the two-decade fight against PR-savvy SeaWorld, which came to a head with the tragic death of trainer Dawn Brancheau in 2010. Kirby puts that horrific animal-on-human attack in context. Brancheau's death was the most publicized among several brutal attacks that have occurred at Sea World and other marine mammal theme parks.

Death at SeaWorld introduces real people taking part in this debate, from former trainers turned animal rights activists to the men and women that champion SeaWorld and the captivity of whales. In section two the orcas act out. And as the story progresses and orca attacks on trainers become increasingly violent, the warnings of Naomi Rose and other scientists fall on deaf ears, only to be realized with the death of Dawn Brancheau. Finally he covers the media backlash, the eyewitnesses who come forward to challenge SeaWorld's glossy image, and the groundbreaking OSHA case that challenges the very idea of keeping killer whales in captivity and may spell the end of having trainers in the water with the ocean's top predators.

For more on the subject, watch Blackfish, a major motion picture from Magnolia Pictures and CNN Films.

DAVID KIRBY is the author of Evidence of Harm, which was a New York Times bestseller, winner of the 2005 Investigative Reporters and Editors award for best book, and a finalist for the New York Public Library Helen Bernstein Award for Excellence in Journalism; Animal Factory, an acclaimed investigation into the environmental impact of factory farms; and Death at SeaWorld, a scientific thriller about the lives of killer whales in captivity and the people who fought for their liberation. He lives in New York City.

“Should some of the most social, intelligent and charismatic animals on the planet be kept in captivity by human beings? That is a question asked more frequently than ever by both scientists and animal welfare advocates…Now the issue has been raised with new intensity in Death at SeaWorld by David Kirby, just released in paperback.” —The New York Times

“Kirby makes a passionate case for captivity as the reason orcas become killers (and) tells the story like a thriller. His argument is, for the most part, fair and persuasive… We probably can't free the orcas in captivity today, but we could make the current group of captive killer whales the last.” —Wall Street Journal

“A gripping inspection… Hard to put down.” —Booklist (***Starred Review)

“Kirby says people do not realize that whales often live with the same pod from birth and that when marine parks take them from their pods they are separated from their families… The killer whales then, in some instances, take out those emotions on other whales, which doesn't happen in the wild as much.” —CBS This Morning

“Thanks to investigative journalist David Kirby, we are now equipped to consider (attacks in captivity) in context. His book is packed with facts about killer whales and the stress caused by keeping them in captivity and asking them to perform for humans. ” —NPR.org

“Nature has a way of biting back. The true story told in the 2012 scientific thriller Death at SeaWorld exposes the dark side of America's most beloved marine mammal park. From the tragic death of trainer Dawn Brancheau in 2010 to other less-publicized incidents, the book chronicles the perils of attempting to subdue the species.” —Al Jazeera

“David Kirby, author of ‘Death at SeaWorld: Shamu and the Dark Side of Killer Whales in Captivity,' has posted a persuasive rebuttal. SeaWorld as much as self-indicts its orca practices as indefensible.” —Chicago Sun Times

“David Kirby, whose recent book ‘Death at SeaWorld' traces the history of killer whales in captivity, found that Tilikum was captured off Iceland in the early 1980s when just two years old. He was kept in a tiny covered pool for two years before being sold to a marine park in Canada which closed after he drowned a trainer. Kirby says Tilikum is a very disturbed and dangerous animal.” —Sunday Times (UK)

“Recent publications like David Kirby's ‘Death at Sea World' are increasing recognition of the great wrong being done to the mind in the waters by continuing live captures and captive breeding of orcas. Some orcas in captivity do attack and kill or injure their captors. Tilikum, once captive at the former Sealand in Oak Bay, has killed three people.” —Victoria (BC) Times Colonist

“'Death at SeaWorld' by David Kirby was just released in paperback. (It) tells a story of intelligent animals that, while often friendly to humans, nevertheless carry with them what some argue is inevitable psychological damage due to captivity.” —Nature World News

“Detailed and thorough…Kirby writes objectively, and with a clear vision when discussing the history of killer whales in captivity. He also shows how SeaWorld is a microcosm where smiles are required.” —Metro Montreal

“Death at SeaWorld, a 2012 exposé by David Kirby, is a comprehensive account starting from when the first orca was captured up until 2012, when OSHA hit SeaWorld with safety violations. It has helped change and educate the public about orcas in captivity.” —The Manitoban

“Kirby shows that the reality (of orca captivity) is more akin to a circus, in which any benefits are outweighed by the cost to the whale – and sometimes to the keepers.” —Financial Times

“Thorough and disturbing… One of the great books of the summer.” —Columbus Dispatch

“SeaWorld got a firm slap in the form of journalist David Kirby's fascinating and deeply disturbing book.” —Christian Science Monitor

“An informed narrative that strongly suggests that despite their name, only when captured do the mammals become dangerous to humans. Free Willy, indeed.” —New York Daily News

“Kirby has done his homework and does an excellent job of educating the public about orcas in the wild, as well as highlighting the dangers inherent in keeping these highly evolved, intelligent animals in captivity.” —Examiner.com

“One of the summer's most anticipated new releases” —Apple I-Bookstore

“Well written, well studied so as not to come across as a misinformed or ill-informed journalism (as if we had any doubt), two sided, and done with a lot of emotion to help draw the reader in as if you were reading a murder mystery. Done like a true novelist... Definitely a five star review and a two thumbs up.” —Artists On Demand

“A new book examining the dark side of keeping killer whales in captivity has slammed SeaWorld for its treatment of the enormous beasts and for massive safety failings which still haunt the world famous marine parks.” —Daily Mail (UK)

“Fascinating, shocking, even infuriating, but ultimately rewarding… Discover the majesty of killer whales, the inherent cruelty of their captivity and the passion of those who fight for their freedom.” —Shelf Aware, Online Book Reviews

“A page-turning book… a disturbing account that will be hard for SeaWorld to transcend… Kirby makes it horrifyingly clear how serious (captivity) can be for human safety and orca well-being.” —Wayne's Blog, Wayne Pacelle, CEO of The Humane Society of the United States

“Even if you're not an animal nut like me, David Kirby's Death at Sea World is a fascinating book.” —Sam Simon, Co-Creator of The Simpsons and leading animal-rights activist

“An exhilarating journalistic achievement--the reporting is singularly deep and wide, the research enormously meticulous, the storytelling as gripping as in a great novel.” —Talking Animals with Duncan Strauss, WMNF-FM, Tampa

“I was sent a pre-release copy and can't put it down… Get a copy of this book. It's about time it was written.” —Fayetteville Observer

“Kirby's knockout format is articulate and mind-blowing. This riveting read is not one that will easily be dismissed.” —Digital Journal

“Lives are at stake here, and Kirby can be trusted to tell the story, having won a passel of awards for his investigative work.” —Library Journal

“Simply superb… David Kirby has left no stone unturned. He has successfully refuted the arguments put forth by the pro-captivity advocates.” —Philosophy Book Review

“Get insight into this excellent story by David Kirby about the human-amusement park's treatment of these animals via his book, Death at SeaWorld.” —Sacramento News Review

“I particularly enjoyed this book. It reads very much like a novel to the point when you are staying up later than you should to finish it.” —San Juan Island Update

“The bottom line of these findings is that keeping these magnificent beings in confinement is not a good thing.” —Wild Time Radio TCR-FM (UK)