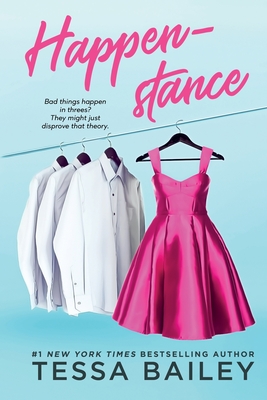 From #1 New York Times bestselling author of It Happened One Summer comes a romantic comedy about an accidental relationship between three smitten men...and one commitment phobic woman.

Elise Brandeis has never won a Pulitzer-and she never will. At least not while she's delivering sandwiches at the Gotham Times, instead of working there as an actual reporter. Her only shot at seeing her byline in print is to prove to the no nonsense managing editor that she has a nose for news. And she's got just the story to grab her elusive attention.

Right after she delivers this turkey on ciabatta.

Chasing down leads brings Elise to Roosevelt Island, but just when the trail of clues begins to take shape, she gets stuck. Literally. On a cable car with three strangers who couldn't be more different. An uptight rugby coach, a construction worker and a former adult film star she pretends not to recognize a little too well.

At first, Elise wants nothing more than to be rescued ASAP.

An hour later, everything has changed. By pure happenstance, four separate journeys have collided in an intense, meaningful way. Suddenly, disentangling their lives feels more impossible than winning that Pulitzer. Good thing Elise is too busy proving herself at work to consider three boyfriends. Nobody has time for that-even if they make giving in feel oh so right. But three heads are better than one and these loners will teach themselves to work together to win Elise over forever...

And more importantly, keep their dirty socks off her floor.