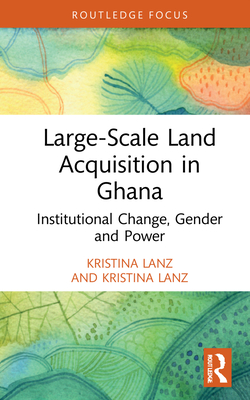 This book examines a large-scale land acquisition project for rice production in Ghana's Volta Region, which has been purported by some to be a social and ecological showcase of a company entering a "community-private partnership" with affected communities.

Celebrated by national and international media, the project has received substantial amounts of funding from various donor organisations and claims to empower women through its much-lauded outgrower project. Although discourses of "development", "sustainability" and "women's empowerment" are used by the investment company, the state and the customary authorities to legitimise the large-scale land acquisition, this book highlights how the deal benefits mainly the powerful elite, including elite women, and generally increases the depreciation of those already most marginalised, such as poor female-headed households and settler communities that were dependent on resources from the commons now enclosed and transformed into a rice farm. The author adopts a New Institutionalist perspective in social anthropology in order to analyse how this land acquisition has been implemented in a plural institutional context and how different actors use different rules and regulations and associated legitimating discourses to increase their bargaining power and to pursue their own interests in a changing legal context. In addition, this perspective shows how benefits and losses are distributed along different intersecting axes of power, such as class, gender, clan membership and age. By focusing on power, gender and legitimisation strategies in the context of institutional change caused by the large-scale land acquisition, this book fills a gap in the literature on large-scale land acquisitions while contributing to the development of a theoretical perspective on institutional change, power relations and ideological legitimisation.

This book will be of great interest to students and scholars of land and resource grabbing, agricultural development and agribusiness, land management and development studies more broadly.

Kristina Lanz is a Senior Policy Advisor for Alliance Sud, where she works on issues relating to development cooperation, development banks and sustainable international development. Within this role, she advises federal offices, members of parliament and the federal council of Switzerland. She holds a PhD in Social Anthropology from the University of Berne, Switzerland.