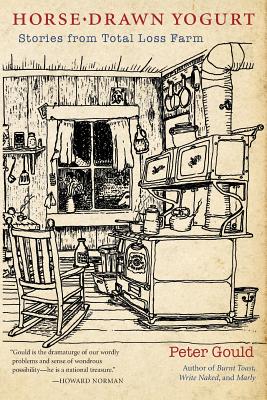 Horse Drawn Yogurt is a book of stories about Peter Gould's decade on Total Loss Farm in Vermont. Peter moved to Vermont in the back to the land movement and turned all the living, eating, smoking, dancing, and loving, and gardening into fiction: his first novel Burnt Toast (Alfred A. Knopf, 1972) brought all that together. His second novel Write Naked (Farrar, Straus & Giroux, 2009)  won the National Green Earth Book Award for Young-Adult eco-fiction. Now, in Horse Drawn Yogurt, Gould has created a patchwork of true stories of farm life. In these stories you'll learn how locals and newcomers helped each other out in a pivotal moment of history, and how young people new to the land learned how to tend gardens and farms, while belonging to a national movement—against the Vietnam war and for peace and justice around the world.
"This book is not a memoir," Gould says. "It's a comforter. I didn't throw all those old clothes away. I cut and pieced them and sewed them together. Now they keep me warm."

PETER GOULD is a founder of youth Shakespeare camps around Northern Vermont, and a professor of meditation-for-conflict-transformation at Brandeis University. Peter was a member of the original back-to-the-land movement in Vermont in the 1970's, a way of life he has chronicled in fictional form in the novels Burnt Toast (Alfred A. Knopf, 1971) and Write Naked (Farrar, Straus, & Giroux, 2008). Peter has worked to perfect his ear for dialogue in more than 4000 live physical theater performances (Gould & Stearns, etc) all over the world, and in directing young people in more than 70 theater productions. His experimental novella, MARLY, was conceived and begun at the Wildbranch Writers Workshop at Sterling College, Vermont, in 2011 and published by Green Writers Press in 2015.