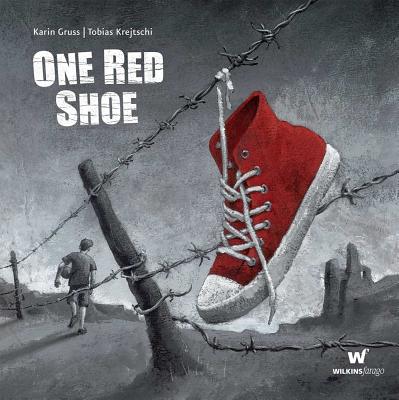 There's been an attack. Grabbing his camera, a newspaper photographer rushes to the nearest clinic. What he finds there will change the way he thinks forever. Inspired by real events in the Middle East, this groundbreaking and acclaimed picture book for older readers will take you to a place far from comfort and safety. What could you possibly have in common with the kids who live there? You're about to find out. One Red Shoe was named one of the five Most Beautiful German Books of 2013 in the children's book category by the German Book Art Foundation.

Karin Gruss is a former teacher and bookseller, and oversaw the picture book program at publishing house Peter Hammer Verlag. She currently works as a consultant and instructor on children's literature. One Red Shoe is her first picture book. Tobias Krejtschi is the illustrator of Crafty Mama Sambona, which received several awards (nominated for the German Children's Literature Award, Troisdorfer Picture Book Prize) and has been translated into multiple languages.

“It’s a difficult, upsetting story of the violent unpredictability of life in a war zone, one that will undoubtedly lead to discussions in families and classrooms.”  —Publishers Weekly