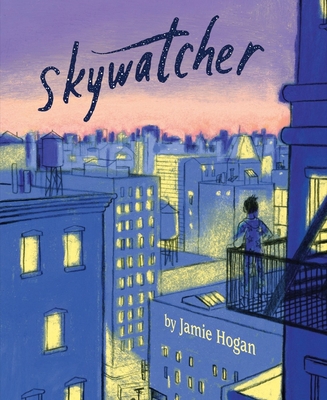 Tamen longs to see the stars, but none are visible in the light-polluted sky above the fire escape of his urban apartment building. Even in the neighborhood park, the stars are hidden by city lights.

This is a story about love and sacrifice: Tamen’s mom, a nightshift nurse, finds a way to take him camping. For one magical night on the shore of a wilderness pond, the Milky Way in all its glory belongs to them.

JAMIE HOGAN has published illustrations in newspapers, periodicals, and numerous award winning children’s books including Rickshaw Girl, which was named one of the Best 100 Books by the New York Public Library and won the Jane Addams Peace Association Award and the Maine Library Association’s Lupine Award; and Island Birthday, which won the 2015 Lupine Award. Jamie lives on an island in Casco Bay with her husband and daughter.
A city-dwelling child gets a chance to see the stars. What makes this story stand out is the relationship between a boy and his hardworking mother, who works the night shift at the hospital, and a special night they share together outside of their usual busy routine. Tamen sees a new side of his mother; together, they feel at one with the universe, and when they return home, Tamen cherishes the memories.
— Kirkus Reviews

A celebration of the darkness, the mysteries of night, the importance of keeping places unpolluted by overlighting, and, most of all, that there’s wilderness out there, and there’s also wilderness within us, and we need to be connected to it.
— Nina McLaughlin - The Boston Globe

Tamen longs to “travel the galaxy just like Skywatcher,” the hero of a comic he is reading, but when he looks out his city window, or even outside in the park, the stars aren’t visible. Tamen’s mom (seen earlier in medical scrubs) takes him on a surprise camping trip, where he is finally able to see the stars. Hogan’s illustrations are almost all in velvety shades of blue to convey the darkness of the night, except for a pale green Luna moth and the golds and purples surrounding the stars. “This black is SO big, but I feel like I’m part of it,” Tamen tells his mom, and she explains that “the atoms in us were forged in stars long ago.” The accompanying double-page spread shows mother and son sitting close together, their bodies sprinkled with the same stars that dot the sky. On their return to the city, Mom goes back to working the night shift, but Tamen feels reassured knowing that the stars are still there even though he can’t see them. An author’s note tells more about light pollution’s disruptive effects on migrating creatures, on conservation, and on humans’ “ability to see beyond ourselves.” A few facts about nocturnal animals and about how readers can become “skywatchers” are also appended.
— Susan Dove Lempke - The Horn Book

Tamen lives in the city, so he cannot see the stars due to the light pollution, but his mother takes him on a camping trip and shows him the constellations. Told with warmth, this story will inspire children to learn more about the constellations and astronomy.
— Penny Peck, San Jose State Univ, iSch - Bay Views, Association of Children's Librarians of Northern California (ACL)