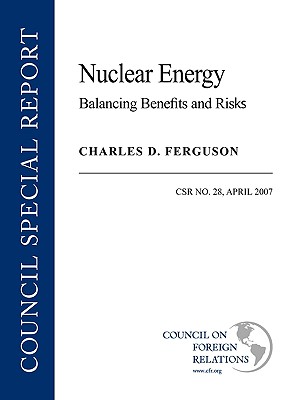 Fears of climate change-induced catastrophe have caused many to consider nuclear energy as a viable alternative to fossil fuels. There are increasing calls for U.S. nuclear energy policy to promote a major expansion of nuclear-generated electricity in the United States and abroad. Charles D. Ferguson argues that such thinking neglects the risks and costs of massive nuclear expansion.Ferguson examines the potential contributions of expanded nuclear energy use. He balances these benefits against the risks of nuclear weapons proliferation, nuclear power plant safety and security, and disposal of radioactive waste. Ferguson recommends creating a level playing field for nuclear energy and other no- and low-greenhouse gas emission energy sources by factoring environmental, safety, and security costs into the price for each energy source. He also proposes a path for creating a less discriminatory nuclear nonproliferation system.