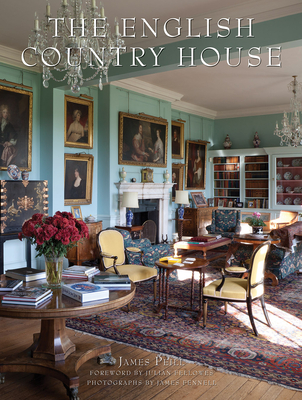 
Not in stock. At Our Partner Warehouse: Usually Ships in 4-7 Days.
In this exquisitely illustrated book, James Peill offers a private tour of 10 magnificent and architecturally distinctive English country houses, all still in the hands of their original families, providing entertaining information about the families and insights into the houses' architecture and interior décor
Stately, grand, and a testament to the generations who have cared for them, the 10 English country houses featured in this volume are a delicious treat for Anglophiles and fans of historic houses. Architecturally unique and filled with evocative family memorabilia, from commissioned portraits to monogrammed heirloom dinner services to the bells that once summoned the downstairs staff, these houses, like the fictional Downton Abbey, are all real homes and still in the hands of descendants of the original owners.

From Kentchurch Court, which has been the seat of the Scudamore family for nearly 1,000 years, to a delightful Gothic house in rural Cornwall to a charming ducal palace to Goodwood House, England’s greatest sporting estate, this beautifully illustrated book, now in a new, smaller format, showcases a wealth of gardens, interiors, and fine art collections. James Peill, coauthor of Vendome’s The Irish Country House and curator of Goodwood, recounts the ups and downs of the deep-rooted clans who constructed these homes and illuminates the history and legends behind these marvelous estates, many of which have never before been published. James Fennell’s evocative photographs bring the homes and their stunning grounds to life. Julian Fellowes, creator of Downton Abbey, contributes a foreword.
James Peill is the curator of Goodwood House in West Sussex, England. Formerly a vice president of Christie’s, where he was a specialist in the European Furniture Department, he is co-author (with the late Desmond FitzGerald, Knight of Glin) of The Irish Country House and Irish Furniture, among other titles.
Julian Fellowes is an English actor, novelist, film director, and screenwriter, best known as the creator and head writer of the phenomenally popular TV series Downton Abbey.
James Fennell specializes in interior, architectural, portrait, fashion, and travel photography. His work has been published in Condé Nast Traveller, World of Interiors, Elle Décor, and Architectural Digest His many books include The Irish Country House, The Scottish Country House, and Vanishing Ireland.