A Place to Hang the Moon (Hardcover) 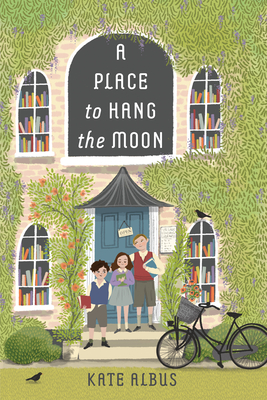 A Place to Hang the Moon (Hardcover)

“This is a heart-warmer! Three orphaned children, determined to stay together, are sent out of London to the safety of the country during the Blitz. All is not happy, but the library is a refuge. Love for reading and for family combine to make this one of the most satisfying books I have read in a long time. It stands right up with the Penderwicks and the Vanderbeekers, and it is perfect for middle-grade readers.”
— Carol Moyer, Quail Ridge Books, Raleigh, NC

For fans of The War That Saved My Life and other World War II fiction, A Place to Hang the Moon is the tale of three orphaned siblings who are evacuated from London to live in the countryside with the secret hope of finding a permanent family.

It is 1940 and William, 12, Edmund, 11, and Anna, 9, aren't terribly upset by the death of the not-so-grandmotherly grandmother who has taken care of them since their parents died. But the children do need a guardian, and in the dark days of World War II London, those are in short supply, especially if they hope to stay together. Could the mass wartime evacuation of children from London to the countryside be the answer?

It's a preposterous plan, but off they go-- keeping their predicament a secret, and hoping to be placed in a temporary home that ends up lasting forever. Moving from one billet to another, the children suffer the cruel trickery of foster brothers, the cold realities of outdoor toilets and the hollowness of empty stomachs. They find comfort in the village lending library, whose kind librarian, Nora Müller, seems an excellent choice of billet, except that her German husband's whereabouts are currently unknown, and some of the villagers consider her unsuitable.
A Place to Hang the Moon is a story about the dire importance of family: the one you're given, and the one you choose.

A Junior Library Guild Gold Standard Selection
Kate Albus grew up in New York and now lives with her family in rural Maryland. The already-dangerous pile of reading material on her nightstand grows daily. A Place to Hang the Moon is her first book. Visit her at katealbus.com.
"With its traditional arc, valiant young characters, and attention to culinary detail ('slices of warm bread flecked with currants and slathered with butter'), this is an assured and satisfying story."—The Wall Street Journal

★ "Both touching and genuine, the historical novel A Place to Hang the Moon speaks to the power of stories and families, both of which can be found in the most unexpected places."— Foreword Reviews, Starred Review

★ "The narrative is fresh, lively, and captivating. The characters are drawn with conviction and a good deal of empathy. Lit by wit and humanity, the novel offers a heartening story in which three resourceful children keep a secret, find what they long for, and treasure it." —Booklist, Starred Review

"It's in the often crisp, often cozy detailing and the ever-so-British turns of phrase . . . that this novel claims a place among the most kid-pleasing orphan stories. The loyal bonds among the Pearce siblings and Mrs. Müller’s bottomless well of patience, ingenuity, and perfectly tailored reading lists will have readers aching to swap their own messier families, however briefly, for the Pearces’ home and hygge." —The Bulletin of the Center for Children’s Books