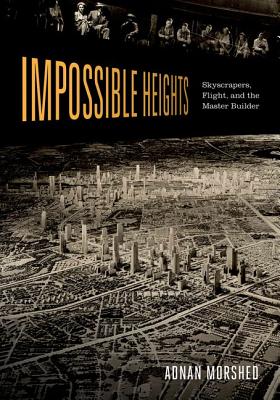 The advent of the airplane and skyscraper in 1920s and ‘30s America offered the population an entirely new way to look at the world: from above. The captivating image of an airplane flying over the rising metropolis led many Americans to believe a new civilization had dawned. In Impossible Heights, Adnan Morshed examines the aesthetics that emerged from this valorization of heights and their impact on the built environment.

The lofty vantage point from the sky ushered in a modernist impulse to cleanse crowded twentieth-century cities in anticipation of an ideal world of tomorrow. Inspired by great new heights, American architects became central to this endeavor and were regarded as heroic aviators. Combining close readings of a broad range of archival sources, Morshed offers new interpretations of works such as Hugh Ferriss’s Metropolis drawings, Buckminster Fuller’s Dymaxion houses, and Norman Bel Geddes’s Futurama exhibit at the 1939 New York World’s Fair. Transformed by the populist imagination into “master builders,” these designers helped produce a new form of visuality: the aesthetics of ascension.

By demonstrating how aerial movement and height intersect with popular “superman” discourses of the time, Morshed reveals the relationship between architecture, art, science, and interwar pop culture. Featuring a marvelous array of never before published illustrations, this richly textured study of utopian imaginings illustrates America’s propulsion into a new cultural consciousness.

Adnan Morshed is associate professor of architecture and architectural history at the Catholic University of America.

"A valuable contribution to the tradition of scholarship on aerial perspective and the history of visuality by focusing upon the interwar period and the American fascination with aviation and skyscrapers."—CHOICE

"Impossible Heights is driven by extensive archival research presented in clear, accessible prose capable of engaging architectural historians as well as readers intrigued by the twentieth century’s unquenchable reach for the skies. In a fascinating read that is enhanced with over a hundred images, Morshed’s Impossible Heights brings to life this period of spectacular vision for the American metropolis."—Journal of American Studies