Fortune's Formula: The Untold Story of the Scientific Betting System That Beat the Casinos and Wall Street (Paperback) 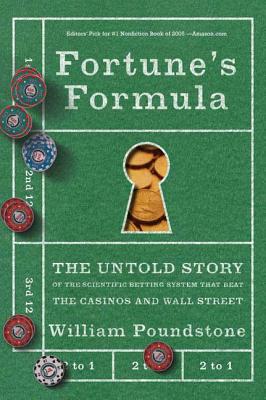 Fortune's Formula: The Untold Story of the Scientific Betting System That Beat the Casinos and Wall Street (Paperback)

In 1956 two Bell Labs scientists discovered the scientific formula for getting rich. One was mathematician Claude Shannon, neurotic father of our digital age, whose genius is ranked with Einstein's. The other was John L. Kelly Jr., a Texas-born, gun-toting physicist. Together they applied the science of information theory—the basis of computers and the Internet—to the problem of making as much money as possible, as fast as possible.

Shannon and MIT mathematician Edward O. Thorp took the "Kelly formula" to Las Vegas. It worked. They realized that there was even more money to be made in the stock market. Thorp used the Kelly system with his phenomenally successful hedge fund, Princeton-Newport Partners. Shannon became a successful investor, too, topping even Warren Buffett's rate of return. Fortune's Formula traces how the Kelly formula sparked controversy even as it made fortunes at racetracks, casinos, and trading desks. It reveals the dark side of this alluring scheme, which is founded on exploiting an insider's edge.

Shannon believed it was possible for a smart investor to beat the market—and William Poundstone's Fortune's Formula will convince you that he was right.

William Poundstone is the bestselling author of more than a dozen nonfiction books, including Fortune's Formula, Gaming the Vote and Priceless. His books Labyrinths of Reason and The Recursive Universe were both nominated for the Pulitzer Prize.

“Seldom have true crime and smart math been blended together so engagingly.” —The Wall Street Journal

“An amazing story that gives a big idea the needed star treatment . . . Fortune's Formula will appeal to readers of such books as Peter L. Bernstein's Against the Gods, Nassim Nicholas Taleb's Fooled by Randomness, and Roger Lowenstein's When Genius Failed. All try to explain why smart people take stupid risks. Poundstone goes them one better by showing how hedge fund Long-Term Capital Management, for one, could have avoided disaster by following the Kelly method.” —Business Week (four stars)

“'Fortune's Formula' may be the world's first history book, gambling primer, mathematics text, economics manual, personal finance guide and joke book in a single volume. Poundstone comes across as the best college professor you ever hand, someone who can turn almost any technical topic into an entertaining and zesty lecture.” —The New York Times Book Review