A Mom for Umande (Hardcover) 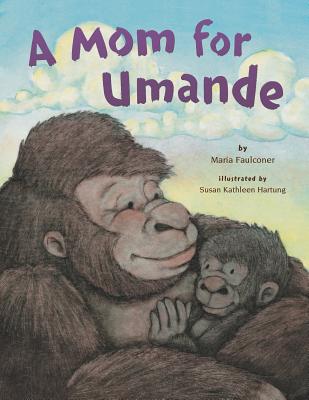 A Mom for Umande (Hardcover)


Email or call for price.
The heart-tugging true story of how a baby gorilla found love in the arms of a surrogate mom

When Umande was born, his mother didn’t know how to take care of him. So, he was hand-reared by keepers at the Cheyenne Mountain Zoo in Colorado Springs. For eight months, the keepers crawled on the ground with him to show him how to walk; coughed in his face to teach him discipline; and gave him happy gorilla grumbles to encourage him. But for Umande, something was still missing. Luckily, a thousand miles away at the Columbus Zoo, a mom was waiting just for him.

This touching true story about finding a family will resonate with animal lovers and adoptive families alike. Share this book with fans of Owen & Mzee, Tarra & Bella, and Knut.
Maria Faulconer has published fiction and nonfiction for children and adults, and her experience as an adoptive mom inspired her to write this story.She lives in Colorado Springs, Colorado.Susan Kathleen Hartung is the illustrator of many children’s books, including Dear Juno, for which she won the Ezra Jack Keats Award. She lives in Brooklyn, Michigan.
* "Not only a special adoption story, but also a heartwarming look at the human-animal relationship." - Kirkus Reviews, starred review

"Hartung gives all the gorillas friendly faces, and Umande’s keepers gaze at him with real affection as they crawl on all fours, groom his fur, and snuggle and tickle him. The book’s final spread, showing Umande and his new mom sleeping in each other’s arms, makes their long-awaited alliance seem meant to be." - The New York Times

"Based on a real situation that occurred at these zoos, the story is compelling in its portrayal of zookeeping and gorilla habits as well as the mother-child focus that shapes its emotional core." - Bulletin of the Center for Children's Books

A Mom for Umande has been nominated for the Show Me Readers Award from the Missouri Association of School Librarians.