Freedom's Pen: A Story Based on the Life of the Young Freed Slave and Poet Phillis Wheatley (Daughters of the Faith Series) (Paperback) 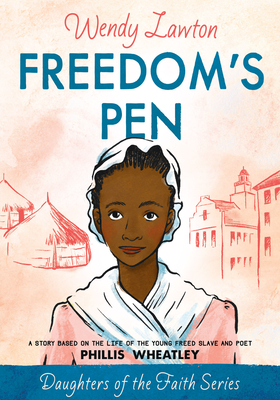 Freedom's Pen: A Story Based on the Life of the Young Freed Slave and Poet Phillis Wheatley (Daughters of the Faith Series) (Paperback)

Daughters of the Faith: Ordinary Girls Who Lived Extraordinary Lives.

1761—Phillis Wheatley was a little girl of seven or eight years old when she was captured in Africa and brought to America as a slave. But she didn’t let her circumstances keep her down.

She learned to read and write in English and Latin, and showed a natural gift for poetry. By the time she was twelve, her elegy at the death of the great pastor George Whitefield brought her worldwide acclaim. Phillis became known to heads of state, including George Washington himself, speaking out for American independence and the end of slavery.

She became the first African American to publish a book, and her writings would eventually win her freedom. More importantly, her poetry still proclaims Christ almost 250 years later.

WENDY LAWTON, an award-winning writer, sculptor, and doll designer, founded the Lawton Doll Company in 1979. She currently works as an agent for the Books & Such Literary Agency. Wendy has written numerous books, including six for her Daughters of Faith series and four for her Real TV series. Wendy is active in her church and is a frequent speaker for women's groups. Wendy and her husband, Keith, are parents to three adult children and live in Hilmar, California.