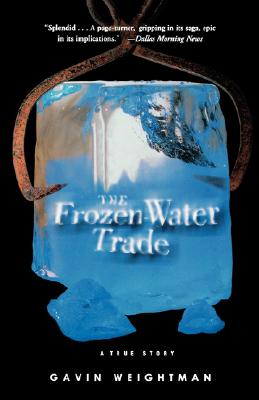 
Not in stock. At Our Partner Warehouse: Usually Ships in 4-7 Days
Now in paperback, the fascinating story of America's vast natural ice trade which revolutionized the 19th century

On February 13, 1806, the brig Favorite left Boston harbor bound for the Caribbean island of Martinique with a cargo that few imagined would survive the month-long voyage. Packed in hay in the hold were large chunks of ice cut from a frozen Massachusetts lake. This was the first venture of a young Boston entrepreneur, Frederic Tudor, who believed he could make a fortune selling ice to people in the tropics.

Ridiculed at the outset, Tudor endured years of hardship before he was to fulfill his dream. Over the years, he and his rivals extended the frozen-water trade to Havana, Charleston, New Orleans, London, and finally to Calcutta, where in 1833 more than one hundred tons of ice survived a four-month journey of 16,000 miles with two crossings of the equator. The Frozen Water Trade is a fascinating account of the birth of an industry that ultimately revolutionized domestic life for millions of people.
Gavin Weightman is a documentary filmmaker, a journalist, and the author of The Frozen-Water Trade, a Book Sense 76 selection. He lives in London.