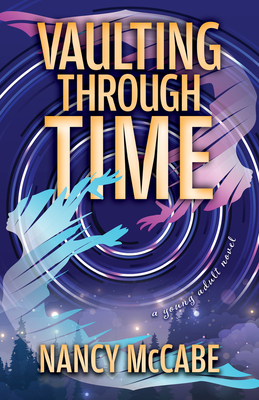 Can she perform the vault of her life to save her loved ones—and herself?

Sixteen-year-old gymnast Elizabeth Arlington doesn’t care that her mother is older than the other girls’ moms or that she doesn’t look anything like her parents. She has too much other stuff to worry about: an embarrassing crush on her ex-best-friend Zach, and changes in her body that affect her center of gravity and make vaulting and tumbling more terrifying than they used to be. But when she makes a discovery that throws her entire identity into question, she turns to Zach, who suggests a way for her to find the answers her mother won’t give her: a time machine they found in an abandoned house.

As Elizabeth catapults through time, she encounters a mysterious abandoned child, an elite gymnast preparing for Olympic Trials, and an enigmatic woman who seems to know more than she’s revealing. Then when a thief makes off with an identical time machine, Elizabeth finds herself on a race to stop the thief before the world as she knows it—and her own future—are destroyed.

An adoptive parent and former longtime gymnastics mom, Nancy McCabe is the author of six books for adults and has published articles in Newsweek, Salon, Writer’s Digest, The Brevity Blog, and the Los Angeles Review of Books, among many others. She’s a Pushcart winner and her work has been recognized nine times on Best American Notable Lists. She directs the writing program at the University of Pittsburgh at Bradford and teaches in the graduate program at the Naslund-Mann School of Writing at Spalding University.