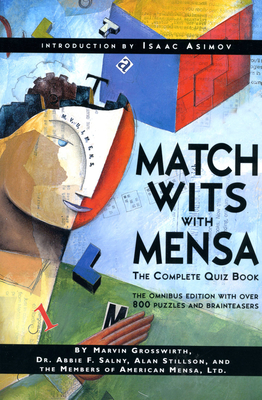 
Not in stock. At Our Partner Warehouse: Usually Ships in 4-7 Days.
The ultimate book of Mensa-crafted puzzles, brainteasers, word games, number conundrums, and logical mysteries to test your intelligence

Puzzle fans have bought more than 650,000 copies of the Mensa Genius Quiz series-the only books that let readers "match wits with Mensa," comparing how well they do against members of the famous high-IQ society. Here, in a giant omnibus edition, are four best-selling titles: The Mensa Genius Quiz Books 1 & 2, The Mensa Genius Quiz-A-Day Book, and The Mensa Genius ABC Book. Here are more than 800 fun mindbenders to exercise every part of your brain-word games, trivia, logic riddles, number challenges, visual puzzles-plus tips on how to improve your thinking skills. All the puzzles have been tested by members of American Mensa, Ltd., and include the percentage of Mensa testers who could solve each one, so that you can score yourself against some of the nation's fittest mental athletes.
Abbie F. Salny, Ed.D., is the Supervisory Psychologist of American Mensa, has written many bestselling puzzle books, including The Mensa Genius Quiz Book. Members of Mensa have all scored in the top two percent of the population on a standard intelligence test.

Alan Stillson is puzzle editor for the Los Angeles chapter of American Mensa, Ltd., whose members have all scored in the top two percent of the population on a standard intelligence test.