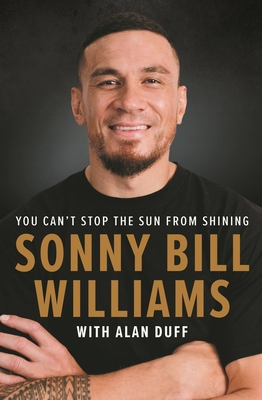 
Backordered. On Order at the Warehouse.
Sonny Bill Williams (SBW) is a once in a hundred-year athlete with immense sporting talent in Rugby League, Rugby Union and Boxing. Sonny Bill has built an incredible career and sporting reputation across the globe. His athleticism has taken him from inner-city Auckland, where he grew up, to the highest sporting moments in Twickenham, Eden Park and Sydney's Olympic Stadium. But there is so much more to Sonny Bill Williams' life and journey than his on-field and in-the-ring triumphs.

Sonny Bill's love of family, his faith, his skill and performance throughout his unparalleled sporting career, his ability to unite a team under pressure, his grace in owning his mistakes, the challenges of leaving home as a young man and dealing with a negative culture and the temptations that followed, and his courage in speaking out for the vulnerable and calling out injustice are all aspects of an inspiring life story.

Sonny Bill Williams was the first Muslim to play for the All Blacks. Driven by a fierce moral compass, Sonny Bill Williams thoughtfully and authentically uses his standing and platform as both a UNICEF Ambassador and an elite sportsperson to speak out on political issues that confront the world today and to benefit those struggling in life. He is a dedicated family man, devoted to his faith, committed to his teammates, respectful of his fans and aware that the path he has taken can inspire and empower others. Working with Alan Duff, award-winning author of Once Were Warriors, this will be the must-read autobiography of the year.,
,

Sonny Bill Williams (SBW) is a once in a hundred-year athlete with immense sporting talent. He has been a national and international champion across Rugby Union, Rugby League and Boxing. Williams began his career in Rugby League, and has played in the Australian NRL with the Canterbury-Bankstown Bulldogs and the Sydney Roosters. He has played for the Toronto Wolfpack in Super League and has played Rugby Union for Toulon in France, Canterbury, Counties Manukau, the Crusaders, the Chiefs and the Blues in New Zealand and the Panasonic Wild Knights in Japan. He has won 58 caps for the New Zealand All Blacks and was a member of the teams that won the 2011 and 2015 Rugby Union World Cups. He has also played Rugby Sevens for New Zealand, competing in the 2015-16 World Rugby Sevens Series and the 2016 Olympics. Williams has boxed professionally seven times, winning all of his heavyweight bouts. He was the New Zealand Professional Boxing Association (NZPBA) Heavyweight Champion and World Boxing Association (WBA) International Heavyweight Champion. Away from sport, Sonny Bill Williams focuses on his family, his Islamic faith and is very involved in charity work and promoting social justice.
Alan Duff is a novelist, columnist, advocate and businessperson. His first published novel, Once Were Warriors, was a critical and commercial success, and was subsequently made into an award-winning feature film. Alan has published several novels and has written for radio and as a newspaper columnist. Duff has been an outspoken commentator on Maori affairs and was the driving force behind the New Zealand Books in Homes scheme, which aims to make books available to underprivileged children at minimal cost.