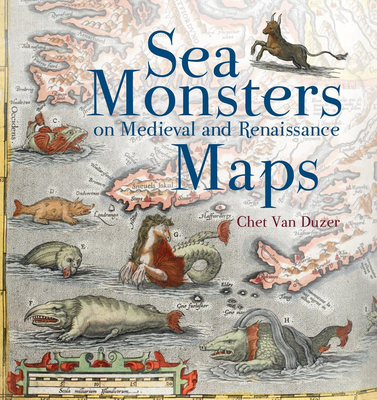 
Email or call for price.
The sea monsters on medieval and Renaissance maps, whether swimming vigorously, gamboling amid the waves, attacking ships, or simply displaying themselves for our appreciation, are one of the most visually engaging elements on these maps, and yet they have never been carefully studied. The subject is important not only in the history of cartography, art, and zoological illustration, but also in the history of the geography of the "marvelous" and of western conceptions of the ocean. Moreover, the sea monsters depicted on maps can supply important insights into the sources, influences, and methods of the cartographers who drew or painted them. In this highly-illustrated book the author analyzes the most important examples of sea monsters on medieval and Renaissance maps produced in Europe, beginning with the earliest mappaemundi on which they appear in the 10th century and continuing to the end of the 16th century.
Chet Van Duzer is a Kislak Fellow at the Library of Congress. He is the author of Johann Schoner's Globe of 1515: Transcription and Study and co-author with John Hessler of Seeing the World Anew: The Radical Vision of Martin Waldseemuller's 1507 & 1516 World Maps.