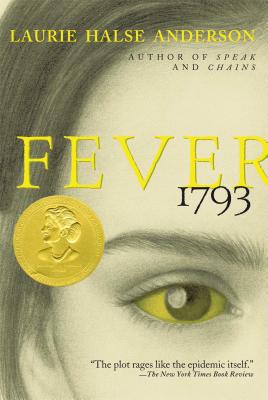 
On Our Shelves Now
An epidemic of fever sweeps through the streets of 1793 Philadelphia in this novel from Laurie Halse Anderson where "the plot rages like the epidemic itself" (The New York Times Book Review).

During the summer of 1793, Mattie Cook lives above the family coffee shop with her widowed mother and grandfather. Mattie spends her days avoiding chores and making plans to turn the family business into the finest Philadelphia has ever seen. But then the fever breaks out.

Disease sweeps the streets, destroying everything in its path and turning Mattie's world upside down. At her feverish mother's insistence, Mattie flees the city with her grandfather. But she soon discovers that the sickness is everywhere, and Mattie must learn quickly how to survive in a city turned frantic with disease.
Laurie Halse Anderson is a New York Times bestselling author known for tackling tough subjects with humor and sensitivity. Her work has earned numerous ALA and state awards. Two of her books, Chains and Speak, were National Book Award finalists. Chains also received the 2009 Scott O’Dell Award for Historical Fiction, and Laurie was chosen for the 2009 Margaret A. Edwards Award. She lives in Pennsylvania, and you can follow her adventures on Twitter @HalseAnderson or visit her at MadWomanintheForest.com.
School Library Journal starred review Readers will be drawn in by the characters and will emerge with a sharp and graphic picture of another world.

The New York Times Book Review A gripping story about living morally under the shadow of rampant death.

The New York Times Book Review The plot rages like the epidemic itself.