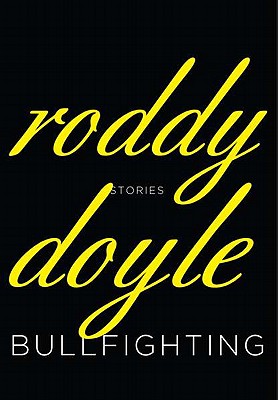 
Email or call for price.
The Man Booker Prize-winning author takes the pulse of modern Ireland with a masterful new collection of stories.
Roddy Doyle has earned a devoted following for his wry wit, his uncanny ear, and his ability to fully capture the hearts of his characters. "Bullfighting," his second collection of stories, offers a series of bittersweet takes on men and middle-age, revealing a panorama of Ireland today. Moving from classrooms to local pubs to bullrings, these tales feature an array of men taking stock and reliving past glories, each concerned with loss in different ways-of their place in the world, of their power, their virility, health, and love. "Recuperation" follows a man as he sets off on his daily prescribed walk around his neighborhood, the sights triggering recollections of his family and his younger days. In "Animals," George recalls caring for his children's many pets and his heartfelt effort to spare them grief when they died or disappeared. The title story captures the mixture of bravado and helplessness of four friends who go off to Spain on holiday. Sharply observed, funny, and moving, these thirteen stories present a new vision of contemporary Ireland, of its woes and triumphs, and middle- aged men trying to break out of the routines of their lives.
Roddy Doyle is an internationally bestselling writer. His first three novels The Commitments, The Snapper, and the 1991 Booker Prize finalist The Van are known as The Barrytown Trilogy. He is also the author of the novels Paddy Clarke Ha Ha Ha (1993 Booker Prize winner), The Woman Who Walked into Doors, and A Star Called Henry, and a non-fiction book about his parents, Rory & Ita. Doyle has also written for the stage and the screen: the plays Brownbread, War, Guess Who's Coming for the Dinner, and The Woman Who Walked Into Doors; the film adaptations of The Commitments )as co-writer), The Snapper, and The Van; When Brendan Met Trudy (an original screenplay); the four-part television series Family for the BBC; and the television play Hell for Leather. Roddy Doyle has also written the children's books The Giggler Treatment, Rover Saves Christmas, and The Meanwhile Adventures and contributed to a variety of publications including The New Yorker magazine and several anthologies. He lives in Dublin. "