To Shape a Dragon's Breath: The First Book of Nampeshiweisit (Paperback) 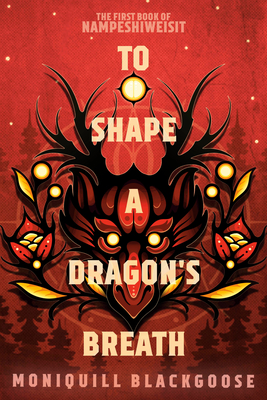 To Shape a Dragon's Breath: The First Book of Nampeshiweisit (Paperback)


Coming Soon - Available for Pre-Order Now
A young Indigenous woman enters a colonizer-run dragon academy—and quickly finds herself at odds with the “approved” way of doing things—in the first book of this brilliant new fantasy series.

The remote island of Masquapaug has not seen a dragon in many generations—until fifteen-year-old Anequs finds a dragon’s egg and bonds with its hatchling. Her people are delighted, for all remember the tales of the days when dragons lived among them and danced away the storms of autumn, enabling the people to thrive. To them, Anequs is revered as Nampeshiweisit—a person in a unique relationship with a dragon.

Unfortunately for Anequs, the Anglish conquerors of her land have different opinions. They have a very specific idea of how a dragon should be raised, and who should be doing the raising—and Anequs does not meet any of their requirements. Only with great reluctance do they allow Anequs to enroll in a proper Anglish dragon school on the mainland. If she cannot succeed there, her dragon will be killed.

For a girl with no formal schooling, a non-Anglish upbringing, and a very different understanding of the history of her land, challenges abound—both socially and academically. But Anequs is smart, determined, and resolved to learn what she needs to help her dragon, even if it means teaching herself. The one thing she refuses to do, however, is become the meek Anglish miss that everyone expects.

Anequs and her dragon may be coming of age, but they’re also coming to power, and that brings an important realization: the world needs changing—and they might just be the ones to do it.
Moniquill Blackgoose began writing science fiction and fantasy when she was twelve and hasn’t stopped writing since. She is an enrolled member of the Seaconke Wampanoag Tribe, and a lineal descendant of Ousamequin Massasoit. She is an avid costumer, and an active member of the steampunk community. She has blogged, essayed, and discussed extensively across many platforms the depictions of Indigenous and Indigenous-coded characters in sci-fi and fantasy. Her works often explore themes of inequality in social and political power, consent, agency, and social revolution.