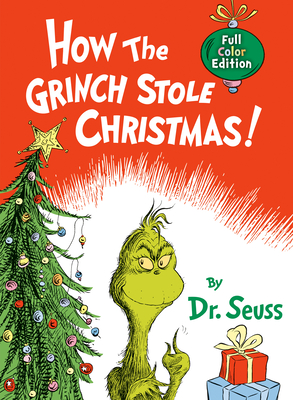 
Click Title to See Location Inventory
Grow your heart three sizes—and dazzle your eyes—with this FULL COLOR edition of the beloved holiday classic How the Grinch Stole Christmas!—the perfect gift for under the tree and for Dr. Seuss fans and collectors any time of year!

This season of giving, give a gift that's never been given before—a full color edition of How the Grinch Stole Christmas! Originally published in 1957 using just 2 different colored inks (red and black), this new, jacketed edition features Dr. Seuss's original illustrations in full color for the very first time—the way he'd have likely colored them had he published the book today! While this edition is not a replacement for the original, we think it makes a cheerful addition to the Dr. Seuss cannon that is bound to appeal to Dr. Seuss fans of all ages. PS: The drabness of the Grinch's life in his cave compared to the happy, vibrant life of the Whos in Who-ville has never been easier to see!
Theodor Seuss Geisel—aka Dr. Seuss—is one of the most beloved children’s book authors of all time. From The Cat in the Hat to Oh, the Places You’ll Go!, his iconic characters, stories, and art style have been a lasting influence on generations of children and adults. The books he wrote and illustrated under the name Dr. Seuss (and others that he wrote but did not illustrate, including some under the pseudonyms Theo. LeSieg and Rosetta Stone) have been translated into 45 languages. Hundreds of millions of copies have found their way into homes and hearts around the world. Dr. Seuss’s long list of awards includes Caldecott Honors, the Pulitzer Prize, and eight honorary doctorates. Works based on his original stories have won three Oscars, three Emmys, three Grammys, and a Peabody.