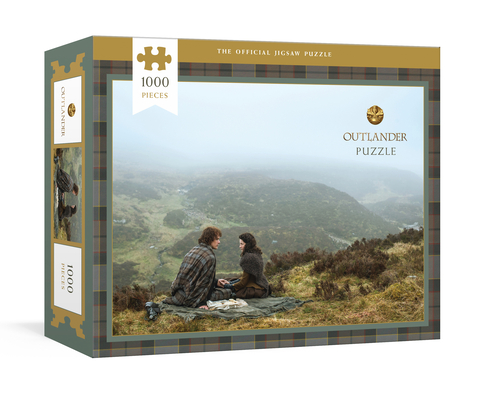 
On Our Shelves Now
Relive the epic romance of Outlander with this vivid 1,000-piece puzzle that features a transporting image of Claire and Jamie enjoying a hilltop picnic in the Scottish Highlands.

• Officially licensed from the hit Starz television series based on Diana Gabaldon’s bestselling Outlander novels, this gorgeous puzzle is perfect for fans of the show and the books alike.
• The striking design features a memorable image of Claire and Jamie from season 1, episode 8, bordered by the tartan pattern of the Fraser clan.
• Sturdy puzzle pieces fit perfectly together, are virtually dust-free with minimal glare, and are designed for easily handling. Pieces are stored in polybag to avoid damage.
• Finished puzzle measures 20 in. by 27 in. and is the perfect conversation piece for any Outlander enthusiast.
Sony Pictures Television (SPT) is one of the television industry's leading content providers, producing, distributing and carrying programming worldwide in every genre and for every platform. In addition to managing one of the industry's largest libraries of award-winning feature films, television shows and formats, SPT is home to a thriving global content business, operating 24 wholly-owned or joint-venture production companies in 12 countries, as well as linear and digital channels around the world. SPT is a Sony Pictures Entertainment Company.