Take Back the Block (Hardcover) 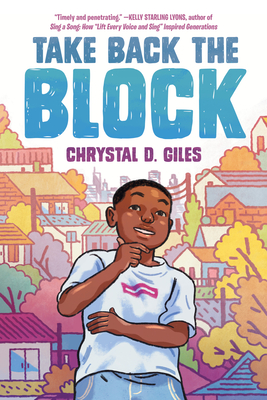 Take Back the Block (Hardcover)

“What an incredible time to be a middle-grade reader. Take Back the Block is a beautiful reminder that more often than not, the most effective, passionate, and honorable activists are barely old enough to drive themselves to rallies for a movement their voices helped create. I love that readers won’t just learn about gentrification in this book — they’ll learn what empathy and community can accomplish.”
— Hannah Oxley, Mystery to Me, Madison, WI

"This book made me want to step aside, hand over the mic, and listen to Wes. A must-read." --Mariama J. Lockington, author of For Black Girls Like Me

Wes Henderson has the best style in sixth grade. That--and hanging out with his crew (his best friends since little-kid days) and playing video games--is what he wants to be thinking about at the start of the school year, not the protests his parents are always dragging him to.

But when a real estate developer makes an offer to buy Kensington Oaks, the neighborhood Wes has lived his whole life, everything changes. The grownups are supposed to have all the answers, but all they're doing is arguing. Even Wes's best friends are fighting. And some of them may be moving. Wes isn't about to give up the only home he's ever known. Wes has always been good at puzzles, and he knows there has to be a missing piece that will solve this puzzle and save the Oaks. But can he find it . . . before it's too late?

Exploring community, gentrification, justice, and friendship, Take Back the Block introduces an irresistible 6th grader and asks what it means to belong--to a place and a movement--and to fight for what you believe in.

"Filled with hope, friendship, and grit." --Stacy McAnulty, best-selling author of The Miscalculations of Lightning Girl

"Timely and penetrating." --Kelly Starling Lyons, author of Sing a Song: How Lift Every Voice and Sing Inspired Generations

"Chrystal Giles really nailed it. I loved this book." --Linda Williams Jackson, award winning author of Midnight Without a Moon

"Wes will welcome middle grade readers into his delightful circle of friends, his strong and loving family, and his powerful community." --Barbara Dee, author of the ALA Notable Children's Book Maybe He Just Likes You
Chrystal D. Giles is a champion for diversity and representation in children’s literature, and made her debut with Take Back the Block, which has received multiple starred reviews. Chrystal was a 2018 We Need Diverse Books mentee, and her poem “Dimples” appears in the poetry anthology Thanku: Poems of Gratitude (Millbrook). Chrystal lives outside Charlotte, North Carolina, with her husband and son and is currently working on her next middle grade novel. Visit her at chrystaldgiles.com and @creativelychrys.

★ "The story echoes contemporary realities that, as its culmination indicates, take an entire community to confront, and it will undoubtedly push readers into action. An ambitious invitation for young readers that delivers promise for all." —Kirkus Reviews, Starred Review

★ "This impressive debut is notable for its depiction of how gentrification pushes the working-class poor out of neighborhoods, as well as substantive ways that communities can protest, all for a middle grade audience. Wes is a humorous, likable, relatable narrator. . . . Giles has crafted an outstanding depiction of the nuances of gentrification as well as the struggle and joys of working-class Black families and communities." —School Library Journal, Starred Review

“In dealing with challenging themes around gentrification, the story capably illustrates the practice’s social costs through characters who humanize and simplify this complicated topic for young people. The underlying message: you are never too young to make your voice heard.” —The Horn Book