Demystiflying: How to Become a Pilot for Those Who Don't Speak Pilot (Paperback) 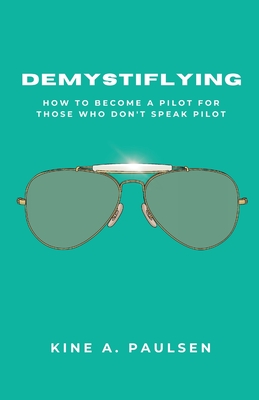 Demystiflying: How to Become a Pilot for Those Who Don't Speak Pilot (Paperback)

By Kine A. Paulsen

You can learn how to fly and become a pilot of your own adventure. It's not too late. You don't have to change your life direction. People from all walks of life have become pilots, and not just through the military or the airlines.

In Demystiflying, Kine Paulsen tells you what you need to do in order to become a pilot by going inside the minds of more than 200 pilots. Paulsen deciphers the meaning behind even the most basic pilot terms and concepts to encourage everyone to give flying a try. This is pilot 101 for anyone who doesn't speak pilot. The book is for those of us who didn't grow up hanging out at the airport or flying flight simulators.

This book is for you who are considering pursuing your pilot license, who might be curious about what it is like to be a pilot or you may have already logged some hours. Or maybe a gift to someone you're close to who has talked about getting into the cockpit but is not sure how to. If you're already a pilot, it should be exciting to reflect on how much you had to learn to get to where you are today. This book is not meant to replace any educational tools, but simply to motivate and inspire.

Paulsen did not spend her childhood dreaming of being a pilot, but chance had it she started her pilot journey in her mid-20s. Like many before her, she was overwhelmed by the amount of information, money issues, and scheduling aspect and stopped after only flying for a few hours. When she started years later, she was looking for a book to ease back in the process hoping she could learn some technical terms, and procedures and read about other pilots' challenges. She found many great resources, but confused by the jargon she found herself even more intimated to get back at it.

Her obsession with understanding the aviation world turned into Demystiflying, an entertaining book to prepare anyone for the first meeting with the cockpit. She was excited to learn that most pilots question whether they are cut out for the challenge. Others also got confused at first. And was surprised by how exciting pre-1940 aviation history books were.

Featuring interviews with hobbyists, influencers, and aviation experts, including:

Demystiflying is the ultimate guide to understanding the world of aviation in an entertaining and non-technical way.