Through A Window: My Thirty Years with the Chimpanzees of Gombe (Paperback) 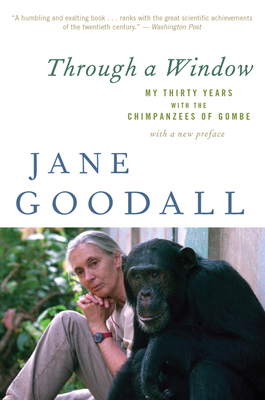 Through A Window: My Thirty Years with the Chimpanzees of Gombe (Paperback)


Not in stock. At Our Partner Warehouse: Usually Ships in 4-7 Days.
The renowned British primatologist continues the “engrossing account” of her time among the chimpanzees of Gombe, Tanzania (Publishers Weekly).

In her classic, In the Shadow of Man, Jane Goodall wrote of her first ten years at Gombe. In Through a Window she continues the story, painting a more complete and vivid portrait of our closest relatives.

On the shores of Lake Tanganyika, Gombe is a community where the principal residents are chimpanzees. Through Goodall’s eyes we watch young Figan’s relentless rise to power and old Mike’s crushing defeat. We learn how one mother rears her children to succeed and another dooms hers to failure. We witness horrifying murders, touching moments of affection, joyous births, and wrenching deaths.

As Goodall compellingly tells the story of this intimately intertwined community, we are shown human emotions stripped to their essence. In the mirror of chimpanzee life, we see ourselves reflected.

“A humbling and exalting book . . . Ranks with the great scientific achievements of the twentieth century.”—Washington Post

“[An] absolutely smashing account . . . Thrilling, affectionate, intelligent—a classic.”—Kirkus Reviews, starred review
JANE GOODALL continues to study and write about primate behavior. She founded the Gombe Stream Research Center in Gombe National Park, Tanzania, and the Jane Goodall Institute for Wild Life Research, Education, and Conservation to provide ongoing support for field research on wild chimpanzees. She is the author of many books, including two autobiographies in letters, Africa in My Blood and Beyond Innocence. Today Dr. Goodall spends much of her time lecturing, sharing her message of hope for the future, and encouraging young people to make a difference in their world.

"Both humbling and an exalting book, the result of thirty years of voyeurism that ranks with the great scientific achievements of the twentieth century." The Washington Post