The Nasty Woman Game: A Card Game for Every Feminist (Game) 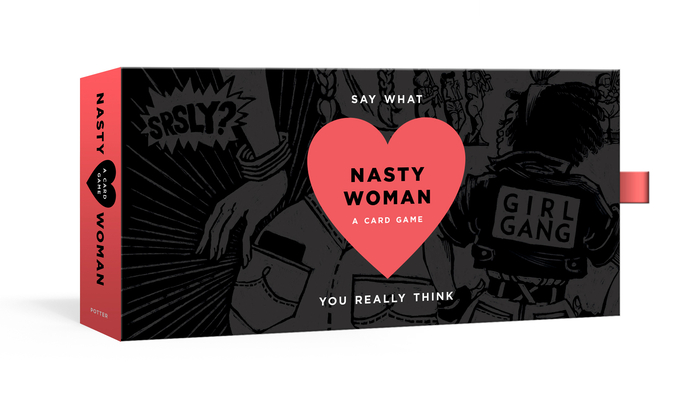 BUSTLE'S MOST WANTED
"Like Cards Against Humanity with a feminist twist" [Cosmopolitan], this game lets you say what you really think--just don't get Trumped!

You can never have enough feminists on your side when it comes to fighting the patriarchy. In the game of Nasty Woman, you take turns drawing cards, following the prompts, and strategizing your next move to collect as many Nasty Woman Cards as possible--including Beyonce, Michelle Obama, Gloria Steinem, and Ruth Bader Ginsburg. Shout out saucy answers to any Statement Cards to win more Nasty Woman cards. Draw the You’re Trumped Card, and you’re out of the game, loser—unless you can trade in a Nasty Woman Card to save you. The last player standing after all other players have been eliminated wins the game--and is the nastiest feminist of them all.

AMANDA BRINKMAN is the creator of the original Nasty Woman t-shirt, and her work has been featured in more than 100 publications including The Washington Post, Forbes, Marie Claire, Allure, Teen Vogue, and New York Magazine. Her design company Shrill Society aims to make people, particularly women, laugh, think, and become more socially active. Through sales of its products, her company has donated more than $130,000 to Planned Parenthood, the ACLU, and other organizations fighting for human rights and the planet. She lives in New Orleans.

"Trash-talking the patriarchy makes for a pretty perfect 'girls' night in'--and [The Nasty Woman Game] is as woke as it is hilarious. If you roll your eyes at every manspreader on the train and keep regular tabs on RBG's well-being, this is the game for you."
--Refinery29

[The Nasty Woman Game] is the kind of casual, funny, frustrated, empowering socio-political conversations you’re already having with your friends in card game form."
--Bustle

"Round up the badass babes in your vicinity for a game of Nasty Woman--like Cards Against Humanity with a feminist twist."
--Cosmopolitan

"A thought-provoking feminist card game. This game encourages players to get up close and personal with friends and family about fighting the patriarchy in a fun, accessible format. Plus, with every set purchased from the Shrill Society site, a donation is made to an organization like Planned Parenthood, She Should Run, or the ACLU."
--Bustle

"We LOVED playing The Nasty Woman Game with our friends. The prompts inspired some seriously hilarious responses but what surprised us was the powerful conversation and deep tangents that sprang forth from our group. After playing I felt even closer to my friends and my own creative consciousness. This is a very funny game with a lot of depth--much like the women in my life."
--Jenny Joslin, Annette Mia Flores, and Kendall Watkins, Co-founders of High Herstory