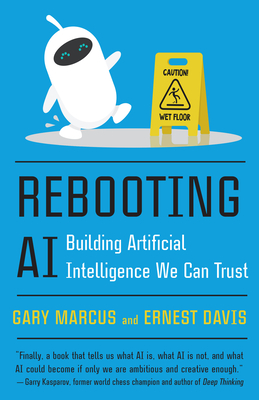 
Email or call for price.
Two leaders in the field offer a compelling analysis of the current state of the art and reveal the steps we must take to achieve a robust artificial intelligence that can make our lives better.

“Finally, a book that tells us what AI is, what AI is not, and what AI could become if only we are ambitious and creative enough.” —Garry Kasparov, former world chess champion and author of Deep Thinking

Despite the hype surrounding AI, creating an intelligence that rivals or exceeds human levels is far more complicated than we have been led to believe. Professors Gary Marcus and Ernest Davis have spent their careers at the forefront of AI research and have witnessed some of the greatest milestones in the field, but they argue that a computer beating a human in Jeopardy! does not signal that we are on the doorstep of fully autonomous cars or superintelligent machines. The achievements in the field thus far have occurred in closed systems with fixed sets of rules, and these approaches are too narrow to achieve genuine intelligence.

The real world, in contrast, is wildly complex and open-ended. How can we bridge this gap? What will the consequences be when we do? Taking inspiration from the human mind, Marcus and Davis explain what we need to advance AI to the next level, and suggest that if we are wise along the way, we won't need to worry about a future of machine overlords. If we focus on endowing machines with common sense and deep understanding, rather than simply focusing on statistical analysis and gatherine ever larger collections of data, we will be able to create an AI we can trust—in our homes, our cars, and our doctors' offices. Rebooting AI provides a lucid, clear-eyed assessment of the current science and offers an inspiring vision of how a new generation of AI can make our lives better.
GARY MARCUS is a scientist, best-selling author, and entrepreneur. He is the founder and CEO of Robust.AI and was founder and CEO of Geometric Intelligence, a machine-learning company acquired by Uber in 2016. He is the author of five books, including Kluge, The Birth of the Mind, and the New York Times best seller Guitar Zero.

ERNEST DAVIS is a professor of computer science at the Courant Institute of Mathematical Science, New York University. One of the world's leading scientists on commonsense reasoning for artificial intelligence, he is the author of four books, including Representations of Commonsense Knowledge and Verses for the Information Age.

Learn more about the authors and their work at rebooting.ai.
“Artificial intelligence is among the most consequential issues facing humanity, yet much of today’s commentary has been less than intelligent: awe-struck, credulous, apocalyptic, uncomprehending. Gary Marcus and Ernest Davis, experts in human and machine intelligence, lucidly explain what today’s AI can and cannot do, and point the way to systems that are less A and more I.”
—Steven Pinker, Johnstone Professor of Psychology, Harvard University, and the author of How the Mind Works and The Stuff of Thought

“Finally, a book that tells us what AI is, what AI is not, and what AI could become if only we are ambitious and creative enough. No matter how smart and useful our intelligent machines are today, they don’t know what really matters. Rebooting AI dares to imagine machine minds that goes far beyond the closed systems of games and movie recommendations to become real partners in every aspect of our lives.”
—Garry Kasparov, Former World Chess Champion and author of Deep Thinking: Where Machine Intelligence Ends and Human Creativity Begins

“Finally, a book that says aloud what so many AI experts are really thinking. Every CEO should read it, and everyone else at the company, too. Then they’ll be able to separate the AI wheat from the chaff, and know where we are, how far we have to go, and how to get there.”
—Pedro Domingos, Professor of computer science at the University of Washington and author of The Master Algorithm

“A welcome antidote to the hype that has engulfed AI over the past decade and a realistic look at how far AI and robotics still have to go.”
—Rodney Brooks, former director of the MIT Computer Science and Artificial Intelligence Laboratory

“AI is achieving superhuman performance in many narrow applications, but the reality is that we are still very far from artificial general intelligence that truly understands the world. Marcus and Davis explain the pitfalls of current approaches with humor and insight, and provide a compelling path toward the kind of robust AI that can earn our trust.”
—Erik Brynjolfsson, Professor at MIT and co-author of The Second Machine Age and Machine | Platform | Crowd

“Rebooting AI is a blast to read. It's erudite, it's witty, and it neatly unpacks why today's AI has such trouble doing truly smart tasks—and what it'll take to reach that goal.”
—Clive Thompson, Wired magazine columnist and author of Coders: The Making of a New Tribe and the Remaking of the World

“Will machines overtake humans in the foreseeable future, or is it just hype? Marcus and Davis lay out their answer with elegant prose and a sure quill, drawing the distinction between today’s deep-learning based narrow, brittle artificial “intelligence” and the ever-elusive artificial general intelligence. Common sense and trust, which are intrinsically human, emerge as grand challenges for the field. If you plan to read one book to keep up with AI—this is an outstanding choice!”
—Oren Etzioni, CEO of Allen institute for AI & Professor of computer science at University of Washington.

“Artificial intelligence is here to stay. What are its achievements, its prospects, its pitfalls and misdirected initiatives—and how might these be remedied and overcome? This lucid and deeply informed account, from a critical but sympathetic perspective, is a valuable guide to developments that will surely have a major impact on the social order and intellectual culture.”
—Noam Chomsky

“A must-read for anyone who cares about the future of artificial intelligence, filled with masterful storytelling and clear and easy-to-digest examples. Simultaneously puncturing hype and plotting a new course towards toward truly successful AI, Rebooting AI offers the first rational look at what AI can and can’t do, and what it will take to build AI that we can genuinely trust. And it does it in a way that engages the reader and ultimately celebrates both what AI has accomplished and the strengths and power of the human mind.”
—Annie Duke, best-selling author of Thinking in Bets: Making Smarter Decisions When You Don't Have All the Facts