Count Me In (Paperback) 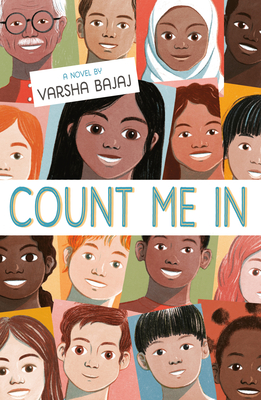 Count Me In (Paperback)


Not in stock. At Our Partner Warehouse: Usually Ships in 4-7 Days.
An uplifting story, told through the alternating voices of two middle-schoolers, in which a community rallies to reject racism.

Karina Chopra would have never imagined becoming friends with the boy next door--after all, they've avoided each other for years and she assumes Chris is just like the boys he hangs out with, who she labels a pack of hyenas. Then Karina's grandfather starts tutoring Chris, and she discovers he's actually a nice, funny kid. But one afternoon something unimaginable happens--the three of them are assaulted by a stranger who targets Indian-American Karina and her grandfather because of how they look. Her grandfather is gravely injured and Karina and Chris vow not to let hate win. When Karina posts a few photos related to the attack on social media, they quickly attract attention, and before long her #CountMeIn post--"What does an American look like? #immigrants #WeBelong #IamAmerican #HateHasNoHomeHere"--goes viral and a diverse population begin to add their own photos. Then, when Papa is finally on the road to recovery, Karina uses her newfound social media reach to help celebrate both his homecoming and a community coming together.
Varsha Bajaj (varshabajaj.com) also wrote the picture books The Home Builders and This Is Our Baby, Born Today (a Bank Street Best Book). She grew up in Mumbai, India, and when she came to the United States to obtain her master's degree, her adjustment to the country was aided by her awareness of the culture through books. In addition to her previous pictur books, she wrote the middle-grade novel Abby Spencer Goes to Bollywood, which was shortlisted for the Cybils Award and included on the Spirit of Texas Reading Program. She lives in Houston, Texas.
“Count Me In is a gem of a book both funny and heartbreaking in equal measure. With its deeply moving portrayal of the healing power of empathy, this is an important and necessary story.”—Aisha Saeed, author of the New York Times bestseller Amal Unbound

“It wouldn’t surprise me at all if this heartfelt novel started a movement of its own! Readers will want to stand up and cheer for Karina and Chris and Papa, and shout to every corner of the world, ‘COUNT ME IN!’”—Kathi Appelt, author of the Newbery Honor winner The Underneath

“Compassionate, relatable characters. The story celebrates resilience, the power of community, and even the benefits of social media during a time when hate crimes against the Indian Diaspora are on the rise. The alternating chapters between Karina and Chris show that Americans come in all colors. Karina's message, that we are stronger together, will easily resonate with readers.”—Booklist

“Karina and Chris draw on their friendship, their families, and the unexpectedly unifying power of social media for strength against fear and hatred. Fast-paced first-person narration alternates between Karina and Chris. This accessible read tackles weighty issues like racism and hatred, while the warmth of the growing friendship among Karina, Chris, and Papa carries readers through the book’s stressful conflicts to its satisfying conclusion. A solid recommendation for fans of books like Hena Khan’s Amina’s Voice and Gita Varadarajan and Sarah Weeks’s Save Me a Seat.”—School Library Journal