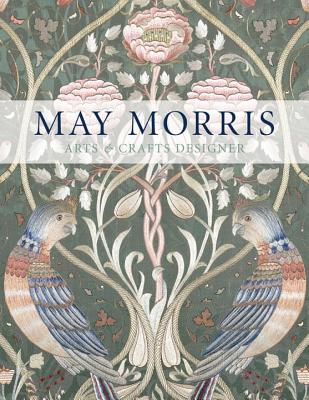 The first fully illustrated introduction to May Morris, a leading contributor to the Arts and Crafts Movement and daughter of famed designer William Morris

May Morris, youngest daughter of influential designer William Morris, was one of the leading female contributors to the Arts and Crafts Movement. She ran the embroidery department of her father’s famous firm Morris & Co., and had a successful freelance career as a designer, maker, and exhibitor, founding the Women’s Guild of Arts in 1907 and undertaking a lecture tour in the United States between 1909 and 1910. May’s approach to embroidery was innovative and widely influential in the UK and abroad, yet her important contribution to embroidery is often overshadowed by the accomplishments of her more famous father.

May Morris: Arts & Crafts Designer is an attractive introduction to May’s work, with exquisite images including close-up photographs of her embroideries. The book is divided into five chapters—Sketches and Watercolors, Wallpapers and Embroidery, Book Covers and Designs, May Morris and the Art of Dress, and Jewelry and Metalwork—each of which opens with an introductory text, followed by catalog entries with extended captions. Interspersed within the chronological arrangement of objects are feature spreads highlighting particular aspects of May Morris’s work.

Jenny Lister is a curator of Fashion and Textiles at the Victoria and Albert Museum, London.

Jan Marsh is a writer and curator who specializes in the Victorian period and the author of biographies of Christina and Dante Gabriel Rossetti, coeditor of the letters of Jane Morris, former president of the William Morris Society, and curator of “Black Victorians in British Art” and “Pre-Raphaelite Sisters” (National Portrait Gallery, London, 2019).

Anna Mason is a leading authority on the Arts and Crafts movement. She is a former curator and manager at the William Morris Gallery and has also worked for the National Trust at the Morris-designed Red House. She is the general editor of William Morris, also published by Thames & Hudson in association with the V&A.
Destined to find an audience that will delight in its well-rounded examination of this talented woman whose work – which comes vividly to life in these pages – may very well provide new inspiration for design lovers everywhere.
— WAG