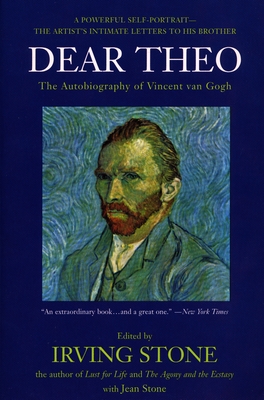 
Not in stock. At Our Partner Warehouse: Usually Ships in 4-7 Days.
“Written from the heart and without restraint, alive.”—The New York Times

Vincent van Gogh, the great but tormented artist, bared his tortured yet ecstatic soul in his letters to his confidant and companion, his beloved brother Theo. These letters reveal the man behind such masterpieces as The Starry Night and The Bedroom—a desperate man whose quest for love became a flight into madness and for whom every day was a “fight for life.”

Irving Stone, acclaimed author of Lust for Life and other remarkable biographic novels, has collected Vincent van Gogh’s fascinating letters to Theo. Here we see the great artist as a human being as well as a man with an appointment with destiny. Van Gogh is a man struggling with doubts and fears, beset by poverty and mental illness, but also a painter who dares to break all the rules of academic art to create priceless masterpieces never honored during his lifetime. He was part of the coterie of great artists of his day while as the same time an intimate of aging streetwalkers. These letters are outpourings of his soul that paint a vibrant self-portrait in words equal to the intensity and emotion his painting created. This is the personal story of a legend.
Irving Stone was born in San Francisco in 1903. He wrote several books in a genre that he coined the “biographical novel,” which recounted the lives of well-known historical figures. In these novels, Stone interspersed biography with fictional narrative on the psychology and private lives of his subjects. He also wrote biographies of Clarence Darrow and Earl Warren, and short biographies of men who lost presidential elections. He died in 1989.
“An extraordinary book... and a great one... Written from the heart and without restraint, alive.”—The New York Times

"One cannot be too grateful for the publication of these letters... Of the deepest human interest."—Books

"A great book, the greatness of a man in his own words."—The Nation