The First Wave: The D-Day Warriors Who Led the Way to Victory in World War II (Hardcover) 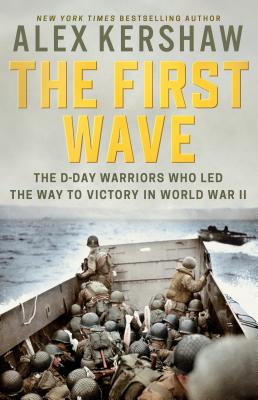 NATIONAL BESTSELLER • Alex Kershaw, author of The Longest Winter and The Liberator, returns with an utterly immersive, adrenaline-driven account of D-Day combat.

Beginning in the predawn darkness of June 6, 1944, The First Wave follows the remarkable men who carried out D-Day’s most perilous missions. The charismatic, unforgettable cast includes the first American paratrooper to touch down on Normandy soil; the glider pilot who braved antiaircraft fire to crash-land mere yards from the vital Pegasus Bridge; the brothers who led their troops onto Juno Beach under withering fire; as well as a French commando, returning to his native land, who fought to destroy German strongholds on Sword Beach and beyond. Readers will experience the sheer grit of the Rangers who scaled Pointe du Hoc and the astonishing courage of the airborne soldiers who captured the Merville Gun Battery in the face of devastating enemy counterattacks. The first to fight when the stakes were highest and the odds longest, these men would determine the fate of the invasion of Hitler’s fortress Europe—and the very history of the twentieth century.

The result is an epic of close combat and extraordinary heroism. It is the capstone Alex Kershaw’s remarkable career, built on his close friendships with D-Day survivors and his intimate understanding of the Normandy battlefield. For the seventy-fifth anniversary, here is a fresh take on World War II's longest day.

Praise for The First Wave:

“Masterful... readers will feel the sting of the cold surf, smell the acrid cordite that hung in the air, and duck the zing of machine-gun bullets whizzing overhead. The First Wave is an absolute triumph.”—James M. Scott, bestselling author of Target Tokyo

“These pages ooze with the unforgettable human drama of history's most consequential invasion.”—John C. McManus, author of The Dead and Those About to Die

Alex Kershaw is a journalist and a New York Times bestselling author of books on World War II. Born in York, England, he is a graduate of Oxford University and lives in Savannah, Georgia. His critically acclaimed books include The Bedford Boys, The Longest Winter, and Escape from the Deep. He is also the author of The Liberator, which is being made into a drama series for Netflix, available in 2020.

Praise for The First Wave:
“[A] fast-paced tale . . . Kershaw is at his evocative best describing the chaos, courage, and carnage of combat, vividly portraying the bravery of the ‘greatest generation.’ Even readers well-read on the subject will enjoy this perspective.”—Publishers Weekly

“The reader looking for inspirational accounts of what it took to win the day—especially in its very first hours—will find Kershaw as compelling as ever. . . . This new history of the twentieth century’s most momentous day belongs on any history lover’s bookshelf.”—The Roanoke Times

“Compelling . . . Kershaw puts events ranging from the humorous to the heartbreaking into context against the backdrop of an operation so large it almost defies comprehension.”—Army magazine

“Alex Kershaw brilliantly brings a new perspective to one of the seminal events of WWII. The First Wave is an awe-inspiring and important book that portrays the blood on the risers, from Captain Frank Lillyman’s airborne pathfinders to Lieutenant George Kerchner’s Rangers and their remarkable assault on the cliffs of Pointe Du Hoc. The sights, sounds, and fury of D-Day are vividly captured in Kershaw’s virtuoso narrative.”—Patrick K. O’Donnell, author of The Unknowns: The Untold Story of America’s Unknown Soldier and WWI’s Most Decorated Heroes Who Brought Him Home

“A masterful retelling of the most dramatic day of World War II—the Allied landings on the beaches of France. In Alex Kershaw’s expert hands, readers will feel the sting of the cold surf, smell the acrid cordite that hung in the air, and duck the zing of machine-gun bullets whizzing overhead. The First Wave is an absolute triumph.”—James M. Scott, Pulitzer Prize finalist and national bestselling author of Rampage

“Master storyteller Alex Kershaw brings the key Allied players of D-Day to life once more. He vividly portrays their exploits—Rangers at Pointe du Hoc, French commandos at Ouistreham, American paratroopers on the Cotentin, and assault troops who hit the Normandy beaches. These pages ooze with the unforgettable human drama of history's most consequential invasion. Read them and you might even feel as though you were there.”—John C. McManus, author of The Dead and Those About to Die

“The First Wave is Alex Kershaw’s stirring tribute to the warriors who successfully carried out the largest and most difficult military operations in history seventy-five years ago. One of the US 1st Infantry Division NCOs who survived that desperate day in Normandy later said, ‘You can’t buy valor and you can’t pull heroes off an assembly line.’ Kershaw’s superb account of D-Day and beyond is the story of their amazing courage under fire and how men ranging from a lord of the realm to the humble son of a president answered the call and began the liberation of occupied Europe from Nazi tyranny.”—Carlo D’Este, author of Patton: A Genius for War

“Meet the assaulters: pathfinders plunging from the black, coxswains plowing the whitecaps, bareknuckle Rangers scaling sheer rock. Will they secure the landing zone? Wrest the beachhead? Or will that last bridge blow up in their faces? Even if we know how D-Day ends, The First Wave grips with all the power of a first read. Fast-paced and up close, this is history’s greatest story reinvigorated as only Alex Kershaw can.”—Adam Makos, New York Times bestselling author of Spearhead and A Higher Call

“A genuine page-turner, with vivid details of the obstacles and inspirations surrounding the heroes who risked their lives in a military campaign of unprecedented scale.”—Daily News (Red Bluff, CA)