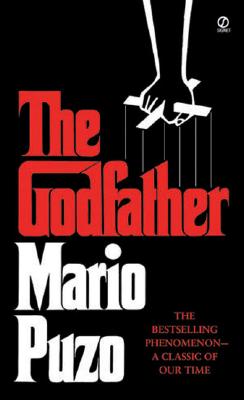 By Mario Puzo
Email or call for price.
Special Order - Subject to Availability.

When Mario Puzo's blockbuster saga, The Godfather, was first published in 1969, critics hailed it as one of the greatest novels of our time, and "big, turbulent, highly entertaining." Since then, The Godfather has gone on to become a part of America's national culture, as well as a trilogy of landmark motion pictures. Now, in this newly-repackaged 30th Anniversary Edition, readers old and new can experience this timeless tale of crime for themselves.From the lavish opening scene where Don Corleone entertains guests and conducts business at his daughter's wedding...to his son, Michael, who takes his father's place to fight for his family...to the bloody climax where all family business is finished, The Godfather is an epic story of family, loyalty, and how "men of honor" live in their own world, and die by their own laws.

Mario Puzo was born on Manhattan's West Side in the neighborhood known as Hell's Kitchen. His first books, The Fortunate Pilgrim ("a minor classic" New York Times) and Dark Arena, brought him critical acclaim, but it was the publication of The Godfather in March 1969 that catapulted him into the front ranks of American authors. Reviewers hailed the book as "a staggering triumph" (Saturday Review), "big, turbulent, highly entertaining" (Newsweek), "remarkable" (Look), and "a voyeur's dream, a skillful fantasy of violent personal power" (New York Times). Winning readers by the millions, it stayed at or near the top of the New York Times bestseller lists for sixty-nine weeks. His follow-up novel, Fools Die (1978), was hailed as the publishing event of the decade. Puzo's last novel, Omerta, was finished shortly before his death in 1999.