The Smart One and the Pretty One (Paperback) 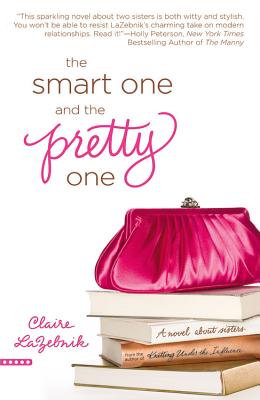 The Smart One and the Pretty One (Paperback)


Not in stock. At Our Partner Warehouse: Usually Ships in 4-7 Days.
In this "witty and stylish" novel, two sisters take on modern relationships -- and find a suitor in a jokingly arranged marriage (Holly Peterson, bestselling author of The Manny).
When Ava Nickerson was a child, her mother jokingly betrothed her to a friend's son, and the contract the parents made has stayed safely buried for years. Now that still-single Ava is closing in on thirty, no one even remembers she was once "engaged" to the Markowitz boy. But when their mother is diagnosed with cancer, Ava's prodigal little sister Lauren comes home to Los Angeles where she stumbles across the decades-old document.

Frustrated and embarrassed by Ava's constant lectures about financial responsibility (all because she's in a little debt. Okay, a lot of debt), Lauren decides to do some sisterly interfering of her own and tracks down her sister's childhood fiance.
When she finds him, the highly inappropriate, twice-divorced, but incredibly charming Russell Markowitz is all too happy to re-enter the Nickerson sisters' lives, and always-accountable Ava is forced to consider just how binding a contract really is . . .
Claire LaZebnik lives in Los Angeles with her TV writer husband and four children. She is the author of the novels Knitting Under the Influence, The Smart One and the Pretty One, and If You Lived Here, You'd Be Home Now.

Ava is the smart sister, an LA. lawyer who hasn't dated in years. Lauren is the pretty sister, an unemployed New York stylist buried in debt. Lauren returns to L.A. when their mother is diagnosed with breast cancer. Between chaufifeuring her to chemo appointments, Lauren finds an old "contract" betrothing Ava to Russell, the son of family friends, and decides a reunion is in order. Though Ava finds herself uncharacteristically falling for Russell, she can't believe a man would choose her over her glamorous sister. She nearly lets her skepticism ruin her shot at love until Lauren meddles again. LaZebnik, author of Knitting under the Influence (2006), writes a funny and endearing novel that truly captures the devotion and rivalry between sisters. Whether they relate to the smart one or the pretty one (or both), readers will find this book irresistible.—Aleksandra Walker, Booklist

LaZebnik (Knitting Under the Influence; Same As It Never Was ) has written another alluring tale of two seemingly different sisters, Ava and Lauren. Both think they have the answers for how the other sibling should live, ignoring some glaring gaps in their own personal history. Ava is the successful lawyer who can always be found in the frumpiest of frocks, whereas her younger sister lights up a room with her fashionable wardrobe but is now financially depleted because of it. When Ava decides to have Lauren sign a contract that states she will spend money only on necessities, Lauren humorously and affectionately decides that Ava should be held accountable to a "contract" their mother agreed to over 20 years ago that betrothed her to one Russell Markowitz. After Lauren tracks Russell down in an attempt to hook him up with her sister, Ava meets him and is erroneously convinced that Lauren is more his stylish type. It takes tender family bonding and some self-discovery for the two to realize that they are more alike than they thought. Recommended for fans of intelligent chick lit and all public libraries.—Anne Miskewitch, Chicago P.L., Library Journal