Nelly Gnu and Daddy Too (Board book) 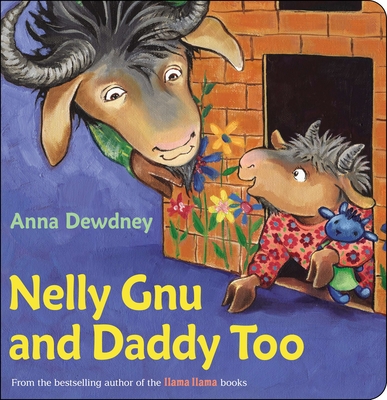 Nelly Gnu and Daddy Too (Board book)

These are things Nelly loves to do…but they’re always better with Daddy Gnu!

With fun-to-read rhyme, a little silliness, and a lot of warmth, Anna Dewdney—the creator of the beloved llama llama books—tells the story of a daughter and her daddy and their wonderful day together.

Anna Dewdney was a teacher, mother, and enthusiastic proponent of reading aloud to children. She continually honed her skills as an artist and writer and published her first Llama Llama book in 2005. Her passion for creating extended to home and garden and she lovingly restored an 18th century farmhouse in southern Vermont. She wrote, painted, gardened, and lived there with her partner, Reed, her two daughters, two wirehaired pointing griffons, and one bulldog. Anna passed away in 2016, but her spirit will live on in her books.
PRAISE FOR NELLY GNU AND DADDY TOO:

"[A] Father’s Day-ready vehicle to showcase an involved and attentive parent." —Publishers Weekly

"...an engaging story illustrated with a rainbow of vibrant hues that preschoolers will love." —Kirkus

PRAISE FOR THE LLAMA LLAMA SERIES:

“A real charmer that will leave preschoolers giggling and parents appreciating the familiar scenario.” —Booklist on Llama Llama Red Pajama

“An involving read-aloud, one that will leave kids and parents hoping Llama has many more adventures ahead.” —PW on Llama Llama Mad at Mama

“The expressive animal faces and attention to detail make it a charming addition.” —PW on Llama Llama Misses Mama

"A worthy addition to the Llama collection, just right for readers’ own sick days."—Kirkus on Llama Llama Home with Mama