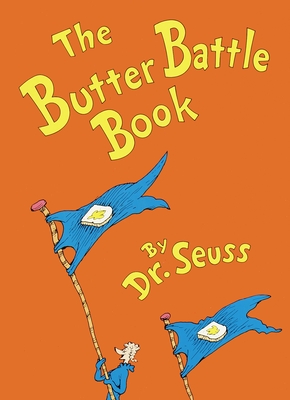 
Not in stock. At Our Partner Warehouse: Usually Ships in 4-7 Days.
The Butter Battle Book, Dr. Seuss's classic cautionary tale, introduces readers to the important lesson of respecting differences. The Yooks and Zooks share a love of buttered bread, but animosity brews between the two groups because they prefer to enjoy the tasty treat differently. The timeless and topical rhyming text is an ideal way to teach young children about the issues of tolerance and respect. Whether in the home or in the classroom, The Butter Battle Book is a must-have for readers of all ages.
THEODOR SEUSS GEISEL—aka Dr. Seuss—is one of the most beloved children’s book authors of all time. From The Cat in the Hat to Oh, the Places You’ll Go!, his iconic characters, stories, and art style have been a lasting influence on generations of children and adults. The books he wrote and illustrated under the name Dr. Seuss (and others that he wrote but did not illustrate, including some under the pseudonyms Theo. LeSieg and Rosetta Stone) have been translated into thirty languages. Hundreds of millions of copies have found their way into homes and hearts around the world. Dr. Seuss’s long list of awards includes Caldecott Honors for McElligot’s Pool, If I Ran the Zoo, and Bartholomew and the Oobleck, the Pulitzer Prize, and eight honorary doctorates. Works based on his original stories have won three Oscars, three Emmys, three Grammys, and a Peabody.
"Dr. Seuss chronicles the feud between the Yooks and the Zooks from slingshots through sophisticated weaponry, until each side has the capacity to destroy the world. The language amuses, the drawings are zesty and humorous, and the demand for this book will be large."--School Library Journal.