The Scorpion's Sting: Antislavery and the Coming of the Civil War (Paperback) 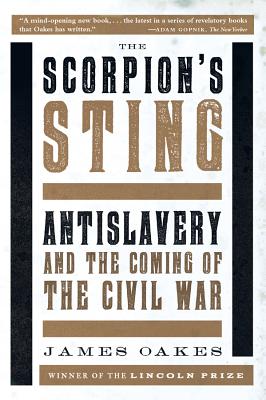 The image of a scorpion surrounded by a ring of fire, stinging itself to death, was widespread among antislavery leaders before the Civil War. It captures their long-standing strategy for peaceful abolition: they would surround the slave states with a cordon of freedom, constricting slavery and inducing the social crisis in which the peculiar institution would die. The image opens a fresh perspective on antislavery and the coming of the Civil War, brilliantly explored here by one of our greatest historians of the period.

James Oakes is one of our foremost Civil War historians and a two-time winner of the Lincoln Prize for his works on the politics of abolition. He teaches at the Graduate Center of the City University of New York.

In The Scorpion’s Sting, Oakes surveys the legal doctrines that enabled President Abraham Lincoln to envision and then enact the Emancipation Proclamation…[It] will lead readers to reflect on the degree to which international law might hold significant implications for the American system of government.

A brilliant book that will force even the most veteran student of antebellum America to rethink previously held assumptions about emancipation.
— Erik J. Chaput

In four swift, clear strokes, James Oakes has rewritten the history of emancipation in the United States.
— Allen C. Guelzo

If any reader still questions whether the Civil War was about slavery, this book overcomes all doubts.
— James McPherson

Incisive, imaginative, surprising, completely original—everything that one would expect from the most eminent historian of emancipation.
— Eric J. Sundquist

In clear prose and with searing insight, James Oakes recovers the moral urgency and strategic vision behind the Republican drive to undermine the slave system. A work of great depth and empathy.
— Alan Taylor