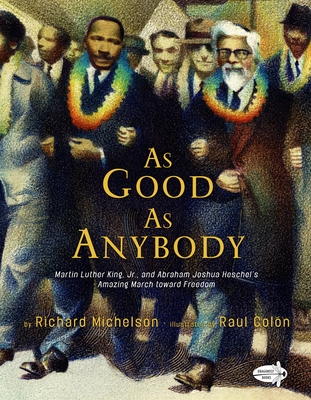 
Click Title to See Location Inventory
MARTIN LUTHER KING, Jr. and Abraham Joshua Heschel. Their names stand for the quest for justice and equality.Martin grew up in a loving family in the American South, at a time when this country was plagued by racial discrimination. He aimed to put a stop to it. He became a minister like his daddy, and he preached and marched for his cause.Abraham grew up in a loving family many years earlier, in a Europe that did not welcome Jews. He found a new home in America, where he became a respected rabbi like his father, carrying a message of peace and acceptance.Here is the story of two icons for social justice, how they formed a remarkable friendship and turned their personal experiences of discrimination into a message of love and equality for all.
Richard Michelson is an award-winning poet and children’s book author whose work has been praised by Elie Wiesel as “deeply moving.” He lives in Northampton, Massachusetts.

Raul Colón is the recipient of both Gold and Silver Medals from the Society of Illustrators. He lives in New City, New York.
Starred Review, Booklist, February 1, 2008:
"“In this powerful, well-crafted story about a partnership between two great civil rights leaders,
Michelson shows how the fight for human rights affects everyone.”

Review, The New York Times Book Review, July 13, 2008:
"A portrait of one of the more unusual partnerships of the civil rights movement."