The Call of the Wild, White Fang & To Build a Fire (Modern Library Classics) (Paperback) 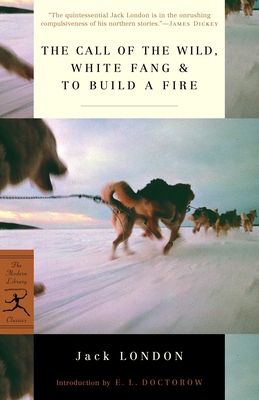 The Call of the Wild, White Fang & To Build a Fire (Modern Library Classics) (Paperback)

Jack London's three timeless tales of the Arctic belong together in this book. London's characterization of dogs is truly his own, weaving together familiarities of man's best friend and our own human race. London expertly juxtaposes and assimilates dogs and people as well as the wild and civilization in these well-loves stories.

To this day Jack London is the most widely read American writer in the world," E. L. Doctorow wrote in The New York Times Book Review. Generally considered to be London's greatest achievement, The Call of the Wild brought him international acclaim when it was published in 1903. His story of the dog Buck, who learns to survive in the bleak Yukon wilderness, is viewed by many as his symbolic autobiography. "No other popular writer of his time did any better writing than you will find in The Call of the Wild," said H. L. Mencken. "Here, indeed, are all the elements of sound fiction."
White Fang (1906), which London conceived as a "complete antithesis and companion piece to The Call of the Wild," is the tale of an abused wolf-dog tamed by exposure to civilization. Also included in this volume is "To Build a Fire," a marvelously desolate short story set in the Klondike, but containing all the elements of a classic Greek tragedy.
"The quintessential Jack London is in the on-rushing compulsive-ness of his northern stories," noted James Dickey. "Few men have more convincingly examined the connection between the creative powers of the individual writer and the unconscious drive to breed and to survive, found in the natural world. . . . London is in and committed to his creations to a degree very nearly unparalleled in the composition of fiction."
Jack London (1876-1916), by turns a renegade adventurer,
a war correspondent, and an avowed socialist, first achieved fame with The Son of the Wolf (1900), a collection of short stories drawn from his experiences in the Klondike gold rush. "The greatest story Jack London ever wrote was the story he lived,  said Alfred Kazin.