Team Chu and the Battle of Blackwood Arena (Hardcover) 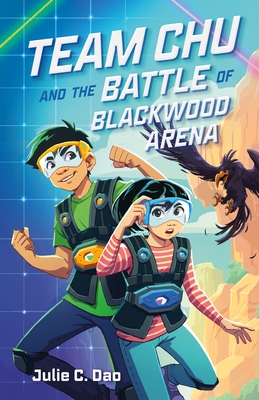 Team Chu and the Battle of Blackwood Arena (Hardcover)

This is book number 1 in the Team Chu series.

A rollicking, action-packed adventure of laser tag and fierce sibling rivalries, Team Chu and the Battle of Blackwood Arena is the first book in a commercial middle grade fantasy series by Julie C. Dao.

Clip and Sadie Chu couldn’t be more different. Popular, athletic Clip wants to become his school’s first seventh-grade soccer captain, while brainy star student Sadie is determined to prove that she can do anything her boastful brother can.

They have just one thing in common: they love laser tag. Like, really love it.

When the Blackwood Gaming Arena comes to town, bringing virtual reality headsets and state-of-the-art courses, they couldn’t be more excited—or competitive. But then a mysterious figure appears and claims to be a part of the game, forcing the Chus and their friends to save themselves from a sinister force lurking inside the simulation. Together, they must fight their way through epic battlegrounds that will test their speed, skills, and smarts . . . but will Clip and Sadie learn that they’re far better off working together than competing for the ultimate victory?

Julie C. Dao is the critically acclaimed author of many books for teens and children including Forest of a Thousand Lanterns and Broken Wish. Her novels have earned starred reviews from Booklist, School Library Journal, and Publishers Weekly, won recognition as Junior Library Guild Selections and Kids' Indie Next List picks, and landed on multiple best-of-year lists including YALSA and the American Library Association. A proud Vietnamese-American who was born in upstate New York, she now lives in New England.

"Dao is a bright voice in middle grade fiction, crafting characters and plot in a way that feels effortless...A fresh title that weaves elements of sports stories and sci-fi with realism and beautifully developed characters, in a way that makes this story irresistible." —School Library Journal, STARRED REVIEW

"Through the siblings’ alternating perspectives and respective internal struggle... Dao (Song of the Crimson Flower) delves into the Chu’s intergenerational dynamics, pressures, and expectations. A rousing adventure and heartwarming series opener." —Publishers Weekly

"Chapters alternate between sports-loving Clip’s voice and academically inclined Sadie’s point of view as the siblings unravel the mystery in the most challenging—and imaginative—game of laser tag they’ve ever played. Young gamers, and readers who enjoy rooting for a strong sibling relationship full of competition and support, will revel in this fun, fast-paced adventure." —Booklist

“An action-packed tale of sibling rivalry where thrills and challenges highlight the importance of family and teamwork. This book will delight readers with its fast pace and captivating worlds. Dao has once again crafted a must-read story full of immersive adventure.” —Adrianna Cuevas, author of Pura Belpré Honor book The Total Eclipse of Nestor Lopez and Cuba in My Pocket

“Laser tag has never been cooler! Both a wild, rollicking adventure and a sweet and nuanced sibling story, Julie C. Dao’s middle-grade debut is first on the leaderboard for me.” —E.L. Shen, author of The Comeback

“Julie Dao delivers a thrilling, pulse pounding joy ride of an adventure brimming over with humor and heart. Readers will love following bickering siblings Sadie and Clip into their wildly imaginative and sinister game of laser tag that will test their skills, their nerve and their love for each other. Team Chu forever!” —New York Times bestselling author Samira Ahmed

“An epically cool adventure that combines fantasy, virtual reality, and competitive sibling rivalry. Team Chu and the Battle of Blackwood Arena is fast-paced and bursting with richly designed gaming worlds that you'll wish were real. It's vivid, thrilling, and so much fun.” —Akemi Dawn Bowman, author of the William C. Morris Award Finalist Starfish and The Infinity Courts series

“The perfect balance of heart and action that will have young readers racing to that last page--and then screaming for the next book.” —Scott Reintgen, Indie Bestselling author of the Nyxia series