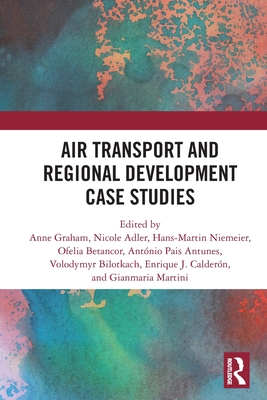 This book is one of three inter-connected books related to a four-year European Cooperation in Science and Technology (COST) Action established in 2015. The Action, called Air Transport and Regional Development (ATARD), aimed to promote a better understanding of how the air transport related problems of core regions and remote regions should be addressed in order to enhance both economic competitiveness and social cohesion in Europe.

This book focuses on case studies in Europe related to air transport and regional development. It is divided into four geographical regions after a general chapter that compares regional air transport connectivity between remote and central areas in Europe. The first region is Northern and Western Northern Europe (case studies related specifically to Norway, Finland, the United Kingdom, and Ireland); the second is Central and Eastern Europe, (Bulgaria, Bosnia and Herzegovina, and Poland); the third is Central Western Europe (Belgium and Switzerland); and finally, the fourth is Southern Europe (Portugal, Spain, and Italy). There is no other single source publication that currently covers this topic area in such a comprehensive manner by considering so many countries.

The book aims at becoming a major reference on the topic, drawing from experienced researchers in the field, covering the diverse experience and knowledge of the members of the COST Action. The book will appeal to academics, practitioners, and policymakers who have a particular interest in acquiring detailed comparative knowledge and understanding of air transport and regional development in many different European countries. Together with the other two books (Air Transport and Regional Development Methodologies and Air Transport and Regional Development Policies), it fills a much-needed gap in the literature.