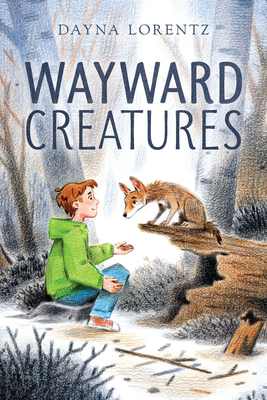 "As a story about community, healing, and family—both human and animal—this is one of the best."—Kirkus Reviews, starred review. In this heartfelt animal friendship story, a troubled young boy befriends a wayward coyote after a forest fire changes both of their lives. Perfect for fans of A Wolf Called Wander and Pax.

Twelve-year-old Gabe doesn’t know where he belongs anymore. His family is caught up in their own lives and his friends barely have time for him now that they’re stars on the soccer team. In a desperate plea for attention to impress his friends after school, Gabe sets off fireworks in the woods near his house and causes a small forest fire that destroys several acres of land.

In the chaos of the destruction, a coyote named Rill—tired of her family and longing for adventure—finds herself far from home. Already on animal control’s watch for wandering into a backyard and snapping at a child, Rill crawls into a cave, where she nurses her wounds alone.

Gabe and Rill’s paths irrevocably cross when Gabe is tasked with cleaning up the forest through the court's restorative justice program. The damage to the land and both their lives is beyond what the two can imagine. But together, they discover that sometimes it only takes one friend to find the place where you belong.

Dayna Lorentz is the author of Of a Feather, the Dogs of the Drowned City trilogy, and the No Safety in Numbers trilogy. She has worked in and around the foster care system, most recently as a law clerk in the Vermont family courts, but she only just started exploring the sport of falconry. Dayna lives in Vermont with her husband and two children.

"This riveting, many-layered story shines on all levels. Gabe’s first-person narration brilliantly (and with humor) captures the tone of an angry, confused tween without being over the top, and his metamorphosis from powerless to empowered is both realistic and compelling. The coyote’s story adds depth and poignancy....As a story about community, healing, and family—both human and animal—this is one of the best." — Kirkus Reviews (starred review)

"Lorentz illustrates how change can come from pain and that there is a path forward, even from the worst situations. The characters and friendships are realistic, as are the emotions Gabe feels. An accessible example of positive approaches to restoration and an excellent tale of relationships and community." — Booklist

"Overall, this book has excellent messaging about navigating friendship challenges, dealing with hard consequences, and the importance of surrounding yourself with supportive people." — School Library Journal

"Carl Hiassen meets Rebecca Stead in this insightful, touching, funny, and as simple as possible but no simpler novel . . . by which I mean, it has the exact right number of elements, no wasted brush strokes, nothing extraneous. It all adds up to a page-turning story that is both new and familiar—timely and timeless—at the same time. I loved it from beginning to end." — Chris Tebbetts, #1 New York Times bestselling co-author of the Middle School series