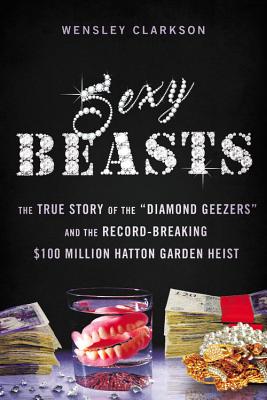 
Email or call for price.
In what has been described as a true-life blend of "Grumpy Old Men" and "Ocean's Eleven, SEXY BEASTS is an insider account of the 2015 Hatton Garden Heist, in which a group of retirement-age career criminals -- the so-called "Diamond Geezers" -- robbed a London jewelry vault, in what would be the biggest burglary in UK history.

The Hatton Garden Heist captured the British public's imagination more than another other crime since The Great Train Robbery. It was supposed to make a fortune for a team of old time professional criminals. Their last hurrah. A final lucrative job that would send the old codgers off on happy retirements to the badlands of Spain and beyond. It seemed to be the stuff of legends. Tens of millions of dollars worth of valuables grabbed from safety deposit boxes in a vault beneath one of the most famous jewelry districts in the world.

But where did it all go wrong for this band of old time villains? And how did the gang's bid to pull off the world's biggest burglary turn into a deadly game of cat and mouse featuring the police and London's most dangerous crime lords?

Nobody is better placed to reveal the full story of the Hatton Garden Heist than Britain's best-connected true crime writer, Wensley Clarkson. Through his unparalleled contacts inside the criminal underworld, he's finally able to reveal the astonishing details behind Britain's biggest ever burglary.
Wensley Clarkson is the foremost chronicler of the UK criminal underworld. He has written numerous true crime books, including biographies of Brink's-Mat defendant Kenneth Noye, ex-Great Train Robber Charlie Wilson, and legendary south London criminal Jimmy Moody. Clarkson's books have sold more than one million books worldwide. He lives in London.