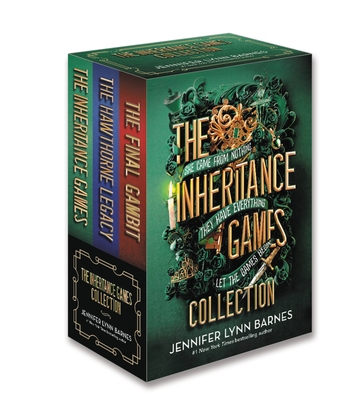 Fall in love with the series everyone is talking about with this hardcover boxed set of the #1 New York Times bestselling Inheritance Games trilogy! The Inheritance Games, The Hawthorne Legacy, and The Final Gambit are together for the first time.


Avery Grambs has a plan for a better future: survive high school, win a scholarship, and get out. But her fortunes change in an instant when billionaire Tobias Hawthorne dies and leaves Avery virtually his entire fortune. The catch? Avery has no idea why -- or even who Tobias Hawthorne is.

To receive her inheritance, Avery must move into sprawling, secret passage-filled Hawthorne House, where every room bears the old man's touch -- and his love of puzzles, riddles, and codes. Unfortunately for Avery, Hawthorne House is also occupied by the family that Tobias Hawthorne just dispossessed. This includes the four Hawthorne grandsons: dangerous, magnetic, brilliant boys who grew up with every expectation that one day, they would inherit billions. Heir apparent Grayson Hawthorne is convinced that Avery must be a conwoman, and he's determined to take her down. His brother, Jameson, views her as their grandfather's last hurrah: a twisted riddle, a puzzle to be solved. Caught in a world of wealth and privilege, with danger around every turn, Avery will have to play the game herself just to survive.

With deadly stakes, thrilling twists, juicy secrets, swoonworthy romance, and billions of dollars hanging in the balance, this "impossible to put down" (Buzzfeed) series is perfect for fans of One of Us Is Lying and Knives Out.
Jennifer Lynn Barnes is the #1 New York Times bestselling author of more than twenty acclaimed young adult novels, including The Inheritance Games series, Little White Lies, Deadly Little Scandals, The Lovely and the Lost, and The Naturals series: The Naturals, Killer Instinct, All In, Bad Blood, and the e-novella, Twelve. Jen is also a Fulbright Scholar with advanced degrees in psychology, psychiatry, and cognitive science. She received her Ph.D. from Yale University in 2012 and is a professor of psychology and professional writing. You can find her online at www.jenniferlynnbarnes.com or follow her on Twitter @jenlynnbarnes.