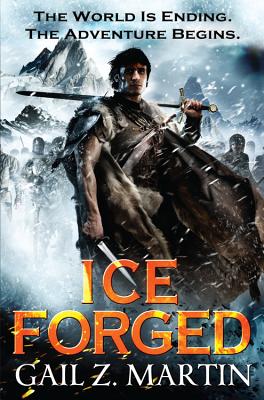 This is book number 1 in the The Ascendant Kingdoms Saga series.

Condemned as a murderer for killing the man who dishonored his sister, Blaine "Mick" McFadden has spent the last six years in Velant, a penal colony in the frigid northern wastelands. Harsh military discipline and the oppressive magic keep a fragile peace as colonists struggle against a hostile environment. But the supply ships from Dondareth have stopped coming, boding ill for the kingdom that banished the colonists.

Now, as the world's magic runs wild, McFadden and the people of Velant must fight to survive and decide their fate . . .

Gail Z. Martin discovered her passion for SF/fantasy in elementary school. The first story she wrote -- at age five -- was about a vampire. Her favorite TV show as a preschooler was Dark Shadows. At age fourteen she decided to become a writer. She enjoys attending SF/Fantasy conventions, Renaissance fairs and living history sites. She is married and has three children, a Himalayan cat and a golden retriever.

" The immediate action in this story pulls the reader in... And with more than a few unexpected twists, this easy-to-follow storyline will leave the reader completely surprised and ready for the next book in the saga."—RT Book Reviews on Ice Forged

"There's plenty of action and plot embroidery, and the pages turn easily."—Kirkus on Ice Forged

"Well written and full of action, this grabs the reader on the first page and refuses to let go until the very last page."—RT Book Reviews on The Sworn

"[Martin] launches herself into the adventure with whole-hearted passion."—SFX on The Summoner